“And upon the Earth are animals and men, some in a middle region, others (elementals) dwelling about the air as we dwell about the sea; others in islands which the air flows round, near the continent; and in a word, the air is used by them as the water and the sea are by us, and the ether is to them what the air is to us. Moreover, the temperament of their seasons is such that they have no disease (Paracelsus disputes this), and live much longer than we do, and have sight and hearing and smell, and all the other senses, in far greater perfection, in the same degree that air is purer than water or the ether than air. Also they have temples and sacred places in which the gods really dwell, and they hear their voices and receive their answers, and are conscious of them and hold converse with them, and they see the sun, moon, and stars as they really are.” (source)

The above quote comes from Plato’s Phaedo, and it’s fascinating for multiple reasons, as are the works of other philosophers who seemed to have knowledge about the true nature of reality thousands of years before we started to discover similar things. How would they have known? There are so many intriguing mysteries of the past that are real head scratchers, like the fact that multiple Mesopotamian societies had knowledge of our solar system, the planets, their orbits, eclipses and much more, well before we ever did.

It’s just as mysterious as “ether” being used in the passage quoted above.

There are also fascinating descriptions about the nature of reality found throughout the ages, and it seems that quantum mechanics was described long ago, and ‘known’ of long before we ever stumbled across the field and named it ourselves.

Quantum mechanics is the study of matter at the smallest scale, and it’s weird because matter, at this scale, behaves and is governed by laws that are completely different from matter at a larger scale. Spooky things are observed that really make no sense, unless you factor consciousness into the equation. Quantum physics has opened the door to ‘non-material’ science, and the fact that empty space is not really empty, that it’s actually full of energy and that factors associated with consciousness can actually have a measurable effect on our physical material world, is mind-altering and has huge implications.

This is why the legendary John Wheeler told us,  “No point is more central than this, that space is not empty, it is the seat of the most violent physics.”

“Space is actually not empty and it’s full of energy…The energy in space is not trivial there’s a lot of it and we can actually calculate how much energy there is in that space and that reality might actually come out of it. Everything we see is actually emerging from that space.”
– Nassim Haramein

The properties of space specifically have been postulated by many, from ancient Vedic philosophy, Eastern Mystics, various ancient civilizations throughout human history all the way to Descartes, Einstein, Newton and more. Humans are curious beings, and our quest to discover “what is” will never end.

“And they allowed Apollonius to ask questions; and he asked them of what they thought the cosmos was composed; but they replied; “Of elements.” “Are there then four?” he asked. “Not four,” said Larchas,  “but five.” “And how can there be a fifth,” said Apollonius, “alongside of water and air and earth and fire?” “There is the ether,” replied the other, “which we must regard as the stuff of which gods are made; for just as all mortal creatures inhale the wire, so do immortal and divine natures inhale the ether.” “Am I,” said Appollonius, “to regard the universe as a living creature?” “Yes,” said the other. – The Life of Apollonius of Tyana, Philostratus, 220AD (source)

Above is a massage describing this ’empty space,’ which many physicists refer to today as the quantum vacuum, or the ether.

“All perceptible matter comes from a primary substance, or tenuity beyond conception, filling all space, the akasha or luminiferous ether, which is acted upon by the life giving Prana or creative force, calling into existence, in never-ending cycles all things and phenomena.”
– Nikola Tesla, Man’s Greatest Achievement,

What Plato Was Talking About

One of the foremost thinkers and philosophers of all time, Manly P. Hall, describes Plato’s passage in his book, The Secret Teachings of All Ages, and it comes at a time where he is describing multiple ‘elementals’ which exist on our Earth, but inhabit the invisible world, existing in another vibration or the ether, if you will, but sometimes appearing in our ‘vibration’ as well.

The fact that Plato/Socrates was aware of this reality thousands of years before we were, gives him even more credibility when describing it’s properties, and those that may dwell within this region of ‘space.’ Are these the ‘ghosts’ and ‘spirits’ that are supposedly seen by many today? Does what we label as ‘paranormal’ activity have anything to do this?

“Much to my surprise, these concepts have been proven in hundreds of laboratories around the world, but have not really seen the light of day.”
– Dr. Brian O’Leary, former NASA Astronaut and Princeton Physics Professor (source)

Pictured below is O’leary with Tewari. He’s received praise from many, including legendary quantum physicist John Wheeler,  who admired his work.  You can review that correspondence here. 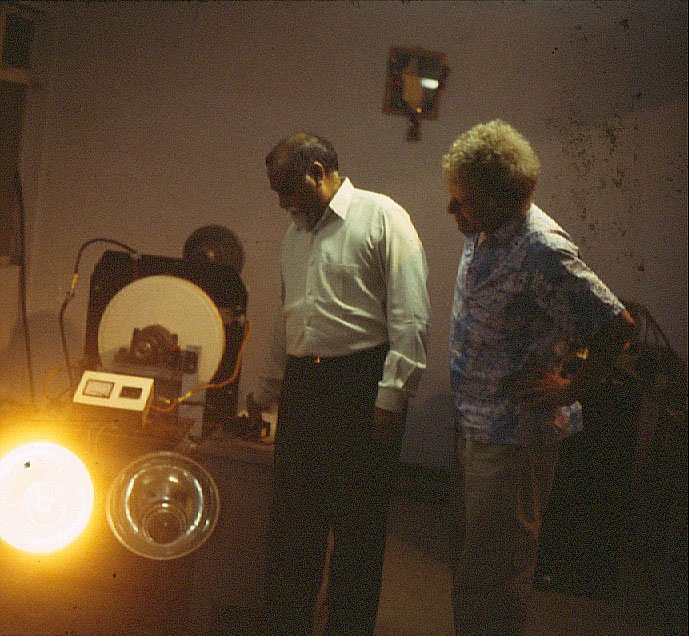 Interesting to think about, isn’t it? How so many of our ancients had knowledge of things that were unable to be discovered without the use of our advanced technology is truly a mystery, and there are literally uncountable examples in historical literature that span thousands of years.

It seems, in my opinion anyway, that humanity is moving towards an era where these understandings are returning to Earth, they are emerging again, and at a time where we desperately need them. These concepts have huge implications, and we’ve written about the non-material world in depth in multiple articles

“Get over it, and accept the inarguable conclusion. The universe is immaterial-mental and spiritual.”
– (“The Mental Universe” ; Nature 436:29,2005)”