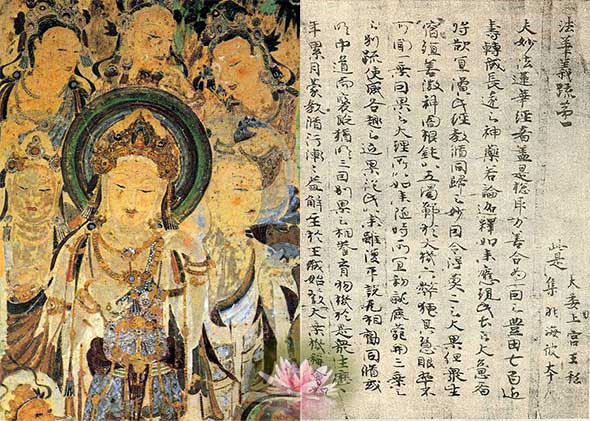 The Buddhist scripture called Saddharma Pundarika or the Lotus of the True Law was first written circa 300 A.D. (Note that the word “Sutra” means “scripture.”)   The exact date of the original Sanscrit version from India is not known with certainty, but the first Chinese translation was made sometime between 265 and 315 A.D.  Buddha himself was born in 563 BC, so the Lotus Sutra was obviously written by Buddhist monks around eight centuries after his death.

The English language version cited here was translated by H. Kern and originally published in 1884 by the Clarendon Press.  This same translation was republished by Dover Books in 1963 in unabridged form and is the source of this paper.

As background before proceeding, Buddhist cosmology is surprisingly modern.  Buddhism recognizes the existence of millions of other worlds and casually asserts that they are inhabited.  Indeed, each inhabited world is stated to have a Buddha of its own.  (The word “Buddha” means an enlightened being.  In Buddhist teachings, anyone is theoretically capable of becoming a Buddha, although actually accomplishing this goal is rare.)  One Buddhist scripture mentions in passing that on earth sermons are given with words, but on other worlds sermons may be given with light or with scents or by other non-verbal means. Another modern aspect of Buddhist cosmology is the recognition that the universe has existed for many millions of years.  Time in Buddhist cosmology is measured in terms of “kalpas.”  A kalpa is figuratively defined as the amount of time it would take to wear away a mile-high mountain if a bird landed on it and sharpened its beak once every thousand years.

Kalpa is a Sanskrit word  meaning an aeon, or a relatively long period of time (by human calculation) in Hindu and Buddhist cosmology. The concept is first mentioned in the Mahabharata. The definition of a kalpa equaling 4.32 billion years is found in the Puranas (specifically Vishnu Purana and Bhagavata Purana).

Incidentally at about the time the Lotus Sutra was being written, the famous University of Nalanda was being created in Northern India.  Nalanda was the first university to teach astronomy and cosmology, as well as teaching mathematics. Although Nalanda was a Buddhist university, it was surprisingly eclectic and attracted students of other religions and students from many Asian countries.  For example, translations from Sanscrit into Chinese carried out at the University of Nalanda preserved many valuable scientific documents whose originals were later destroyed during the Muslim invasions of the 11th century. In the Lotus Sutra the beginning of each chapter provides some context of where the specific sermon was supposedly given when Buddha spoke.  The names of the major disciples who attended are supplied as well.

Chapter 23 of the Lotus Sutra is entitled “Gadgadasvara” and begins on page 393 of the Dover edition.  Because the original 1884 translation uses many Indian names and very long titles (such as a distant world called “Vairokanarasmipratimandita.”) I will paraphrase the section that deals with a visit by an alien from another world.

In Chapter 23, when the terrestrial Buddha was about to give a sermon, he darted a flash of light from a circle between his brows.  This flash of light was seen on other worlds, including the one with the very long name cited in the previous paragraph. On this other world the resident Buddha (who also has a very long name) perceived the ray of light from earth.   One of his students, named Gadgadasvara, also sees the ray of light and realized what it meant, i.e. that the Buddha on this world was about to give an important sermon.

The student asks his master for permission to visit earth and listen to the sermon of Sakyamuni, the terrestrial Buddha.  Permission is granted, but the master gives Gadgadasvara some interesting cautions about what to expect on earth:

(It is rather surprising that a Buddhist religious text would describe the historical Buddha as being “small and ugly.”   In fact as a young man the historical Buddha was described by many eye witnesses as being athletic and comely.  Even at an advanced age Buddha was described as having good posture and a face that reflected wisdom, a benevolent nature, and peacefulness.  Of course from the point of view of an alien, it is hard to say what the surface appearance of a human would look like.)

At this point in chapter 23, Gadgadasvara enters a deep meditation and then appears psychically on earth before Sakyamuni and his students.  One of the earthly students, Manjusri, asks about this mental appearance.  Sakyamuni replies that the visitor is a student from another world.

Manjusri asks if he can learn the same kind of meditation used to travel between worlds.  Manjusri also asks if Gadgadasvara can come in person, because he wants to see what he looks like.

Gadgadasvara agrees, and comes to earth in physical form “accompanied by the noise of hundreds of thousands of musical instruments.”  He arrived by moving through the sky on a “large tower.”  Once he arrived, his appearance on earth was described as follows:

“His face showed eyes resembling blue lotuses, his body was gold colored…and sparkled with a luster.”

Upon arrival Gadgadasvara has a curious but polite conversation with Sakyamuni.  He inquires about this world and about terrestrial students.  Gadgadasvara expresses hope that earthly students are not too troublesome or too difficult to instruct.  This is an interesting conversation because it deals casually with the topic that every inhabited world will have students and teachers and that the students on some worlds may be easier to teach than students on other worlds.

Sakyamuni asks Gadgadasvara to show the earthly students his true shape and body which he does.  But Sakyamuni also points out that Gadgadasvara has the ability to assume many different forms and to take on many other appearances if he wishes to do so.

Gadgadasvara listens to Sakyamuni’s sermon, and then gives a polite “goodbye” to the terrestrial Buddha and returns to his own world:

“he again mounted the tower and with the noise of hundreds of thousands of musical instruments he returned to his own world.”

This brief discussion of an alien visitor in chapter 23 is the only spot in the sutra that deals with interplanetary travel.   The purpose of the discussion appears to be to indicate that Buddhist principles and teachings are valid on all inhabited worlds.  No doubt the discussion in chapter 23 is allegorical rather than describing an actual event.  It is easy to dismiss the account as fiction, but it does contain seven interesting aspects:

Considering that the Lotus Sutra was written around the 3rd century AD and the English translation was made in 1884, the concept of interstellar travel is surprisingly matter of fact.  It is stated explicitly in the chapter that extra-terrestrials can travel between worlds and that visits to earth are not uncommon.  Somewhat more surprising is the concept that instantaneous mental communication between enlightened beings on many worlds is possible and indeed a common activity.  This is surprisingly similar to the idea of “entanglement” from physics, or instantaneous communication between widely separated particles.

It is also interesting that chapter 23 of the Lotus Sutra states explicitly that contacts between humans and non-human aliens can be in the form of polite discussions and scholarly exchanges of information.

It is intriguing that the historical Buddha was not at all surprised by an alien visit, and rather casually explained to his followers what was taking place.  The inference is that Buddha’s on various planets are aware of one another.

Since most of the literature dealing with alien contacts tacitly assumes superior wisdom on the part of the aliens, it is also interesting that chapter 23 describes a visit by an alien specifically to listen to a sermon by a human teacher.

In conclusion, chapter 23 of the Lotus Sutra does not contain ambiguous discussions that have to be twisted and distorted to reflect some form of alien contact.  Chapter 23 asserts specifically that interplanetary travel and contacts between humans and aliens actually occur.  Further, the same chapter asserts that such contacts can be benign and cause no harm to either terrestrial or extraterrestrial participants.