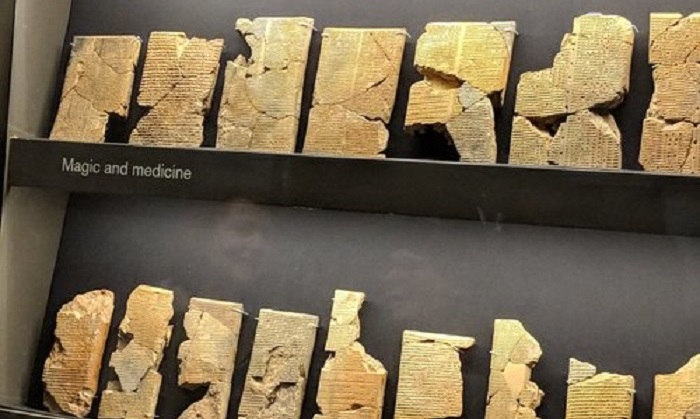 An image of a two-horned creature with a tail and a snake tongue (on a clay plate made 2700 years ago in Iraq).

According to researcher Troels Arboll from the University of Copenhagen, Denmark, the image is of a demonic creature that is associated with a particular disease because there are many “medical” symbols on the tile around it.

Based on these symbols, Arbol believes that this demon has been accused of causing epilepsy.

Epilepsy was known to many ancient peoples. The oldest records were made more than 6,000 years ago. But no one knew the reasons for her appearance. She was often considered a sign of curse or divine intervention. For example, the ancient Greeks and Romans considered epilepsy a curse of the gods.

In Christian times, epilepsy was considered a sign of the Devil’s intervention and such people were called witches or possessed by demons.

This image is one of the earliest images of a demon. It is curious that this image is very similar to medieval images of demons with goat features.

Arbol examines tiles discovered decades ago by archaeologists in excavations of the ancient city of Ashur, Assyria, in Iraq. They have been stored in the Berlin Museum for a long time. They cover the Sumerian cuneiform and depict some aspects of medical activity in those times. They were apparently painted by Assyrian doctors.

According to these records, in his practice, the Assyrian physician combined true medical work and magical rituals.

“We knew earlier that the Assyrians and Babylonians considered the diseases to be manifestations of divine or demonic intervention, or witchcraft. To cure such ailments, special healers were summoned to banish these supernatural powers through rituals of magic and medicine. “

But this is the first time that an epilepsy image depicts a demon in the medical texts.

This demon, according to the text on the tile, bears the name of Bennu and acts “on behalf of” Sinu, the God of the Moon, in Sumerian-Akkadian mythology. The plaque also describes that the patient had cramps, loss of consciousness, and that he sometimes screamed like a goat.

According to Arbol, images of supernatural creatures on cuneiform clay tiles with medical text are extremely rare to be seen. As a rule, the authors of these tiles appreciated each piece of free space and wrote them with recipes or magic ordinances.

In addition to the demon image and descriptions of epilepsy, Arbol decrypts descriptions of the dangers of bile and the risk it poses to humans, text for patients with animal or insect bites, and how poisons can affect the human body.

It’s considered that Hippocrates is the first to write about it, but it turns out that this unknown Assyrian doctor also thought about these conditions, even though he lived hundreds of years before Hippocrates.

In this article:Assyria, Epilepsy demon