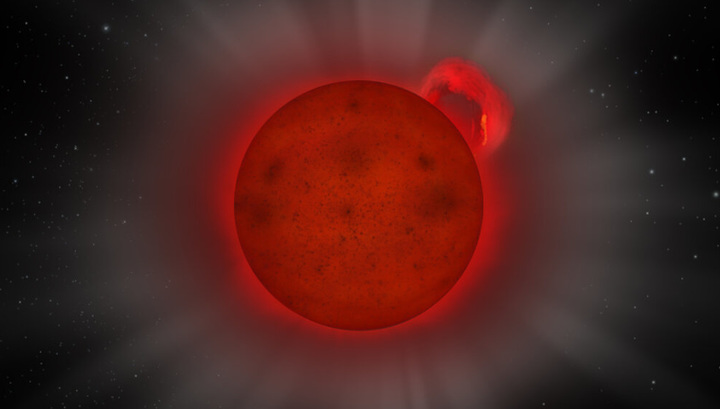 A celestial body, which barely has enough mass to be called a star, suddenly erupted in a flash of incredible power. Astronomers wonder how this is possible.

The discovery is described in a scientific article published in the journal Astronomy & Astrophysics.

Star J0331-27 is located 783 light years from Earth. It belongs to the spectral class L – the class of very small and very cold luminaries, which barely had enough mass to start thermonuclear reactions in their depths. The mass of J0331-27 is only 8% of the sun, and the surface temperature is only 1800 degrees Celsius (compared to 5500 degrees on the Sun).

There is a rule: the smaller the star, the more powerful the outbreaks occurring on it. So, the red dwarfs of class M can boast of real cosmic cataclysms that call into question the suitability of their planets for life. But astronomers did not expect that this pattern applies even to extremely cold L-stars.

According to experts, the flare is due to a sharp restructuring of the magnetic field structure in a small area of ​​the star’s surface. In this case, the energy stored in the magnetic lines is released and heats the surrounding substance. The magnetic field itself is created by plasma – a hot gas consisting of charged particles. Previously, experts believed that the surface plasma of L-dwarfs is too cold to generate a field capable of powerful “fireworks”.

Processing the data of the XMM-Newton space x-ray telescope, the authors found a flash recorded on July 5, 2008. It lasted a few minutes. During this time, 2 ”” 1033 erg of energy was released in the X-ray range alone. This is ten times the energy of the largest flares on the Sun and only half the total energy released by our star in a second (!).

Scientists call events of this magnitude superflares. They are common with the hotter M class red dwarfs, but not with the cooler L stars.

“This is the most interesting scientific part of the discovery, because we did not expect the stars [from the class] of L-dwarfs to store enough energy in their magnetic fields to cause such flashes,” admits Beate Stelzer of the University of Tübingen .

Prior to this, superflares in L-dwarfs were detected several times in visible light. However, for the first time such an event was recorded in x-rays. Moreover, J0331-27 in general became just the second L-dwarf, from which terrestrial telescopes generally caught x-ray radiation.

After analyzing the data of other observatories, the authors found the optical radiation of this outbreak. But observing it in the x-ray range is extremely important. The fact is that visible light comes from the surface of the body, and x-rays from its atmosphere. This will help astronomers figure out how such a phenomenon nevertheless became possible.

“This is a good question,” says Stelzer. “We just don’t know [the answer]. Nobody knows.”

Riddles don’t end there. The fact is that in all known stars faint flashes occur much more often than strong ones. However, XMM-Newton observed J0331-27 for a total of about 40 days and during this time did not detect any other flashes, although the sensitivity of the instrument made it possible to notice them.

It seems that the magnetic field of the L-dwarf gradually accumulates energy and at once releases it in one powerful cataclysm. This behavior is completely unusual for stars, and now astrophysicists have to deal with new facts.

New X-ray flares on L stars can help with this if they are detected. Stelzer and colleagues made their discovery by processing the XMM-Newton observation archive. It includes information on 400 thousand variable sources discovered by the telescope in 13 years. Not all data has been processed yet, so new surprises may well await scientists.

In this article:red dwarf, star eruption