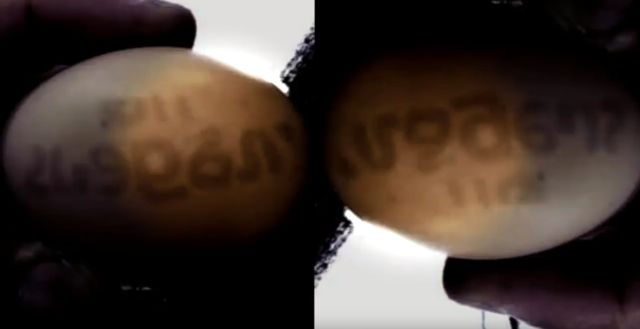 This happened in the municipality of Ceará, Brazil. According to reymisterios.com, a stunned farmer named Raimundo Aluceno came to the local newspaper and demanded that the jounalists send the best scientists to the poultry farm. The reason for this was one of his birds, which laid a somewhat abnormal egg. Raimundo has long been engaged in his business and has seen everything. But for the chicken to lay an egg with some mysterious symbols – this is what he sees for the first time.

First, our hero shared the discovery with his neighbors, who, too, were stunned. Then at a meeting of the villagers, it was decided to send Raimundo to the scientists to explain this strange phenomenon.

Unfortunately, he did not reach the scientists, however, the TV channel Monólitos, broadcasting in Portuguese, became interested in the incident. The journalists went to the place and checked everything, after which they took a short interview from Raimundo.

The egg turned out to be real, not fake, and now no one knows how to interpret this event. The opinions of people are divided.

So, many people think that aliens are to blame for everything, since Brazil is a continuous anomalous zone. But why did aliens need this? Is this some kind of joke or message left to people?

On the other hand, many see the divine sign in everything. Moreover, since the symbols more closely resemble to numbers, not letters, believers see this as the date of prophecy about the Apocalypse.

The situation with this egg is funny on one hand, and not on the the other. Why it is not funny can be understood if we recall that many cultures of the world are engaged in coloring eggs – they draw some patterns, inscriptions and so on.

All this, of course, could be some kind of witchcraft, whose roots go back to times about which nothing is known. But, apparently, there was some reason for the ancient people to make inscriptions on chicken eggs.

Maybe the ancients really had some sacred birds through which some forces transmitted messages to people, painting something on the shell. Then the messages ceased and the people themselves began to draw some patterns, repeating a forgotten ritual.

If this assumption is correct, then probably these ancient and forgotten times are returning and now many birds in the world will be carrying some quotes and valuable advice, so we follow the development of events.

In this article:abnormal egg, egg with message