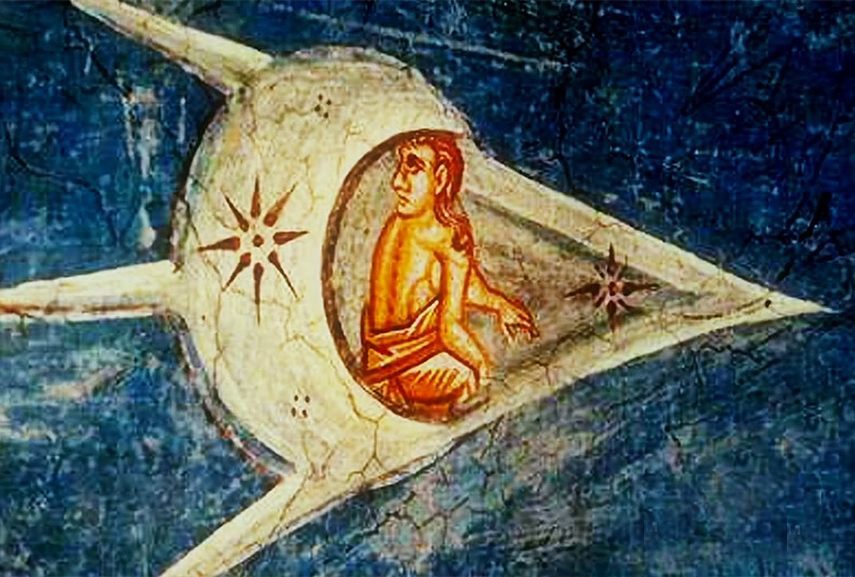 The UFO that appeared during the live broadcast of the SpaceX launch on January 24 this year, officials did not comment on, and skeptics explained it as “space debris.” Only this UFO does not at all look like some kind of debris, and moreover, it is identical in shape to the “Divine chariots” depicted in the 1350 painting.

Researcher MrMBB333 reported on his Youtube channel that the mysterious UFO “looked almost identical” to an object from an orthodox work of art dating back to 1350.

MrMBB333 points to the ISS footage captured by his fellow ufologist two weeks ago. The video shows a tapered object with a contrail sweeping past the SpaceX Starlink launch vehicle. At the moment of its appearance, a pointed tip and an arcuate edge emerge from the lower right corner.

The painting depicting the Crucifixion of Jesus Christ and the unusual objects in the upper corners have attracted the attention of so-called truth seekers around the world.

The UFO appeared literally for a second on the camera showing the lower part of the upper stage. This happened long before the undocking of satellites, and in appearance this object does not look like satellites or a piece of space debris.

The UFO Hunter says, “They have a striking resemblance! Coincidence? I dont know. This picture shows two UFOs, and they both had the same shape as this object directly below the ISS.

“Overwhelmed by this similarity, users said it gave them goosebumps.

One said, “Wow, this is crazy. UFOs and that old picture are very similar.”

Another added: “When I saw a UFO and a picture similar to it, I flinched !!”

The painting is in the main Serbian monastery of Vysokie Decany in Kosovo. In the upper left and right corners, two aircraft are visible, the pilot of the first looks back at the second – perhaps he is being pursued.

According to the official version, the painting depicts the moon and the sun. However, as you know, they are not deified in the Christian religion. Therefore, it is not clear why they are personified. Only scientists are not at all inclined to study such UFOs on ancient frescoes, bas-reliefs, icons, illustrations in books or other historical artifacts.

After all, everything can be explained by the “invention of ancient artists”, “a kind of interpretation of the Sun or Moon” in which, for some unknown reason, those who control these “Suns” fly.

But it is now, in our time, scientists and skeptics can write all sorts of nonsense, but in those days when this picture was created, the divine essence of the UFO was not questioned and for such blasphemy in 1350, it was not long to go before the stake.

“Divine chariots” and the “Gods” themselves returned to the sinful earth?

In this article:biblical UFO, The Crucifixion Of Christ