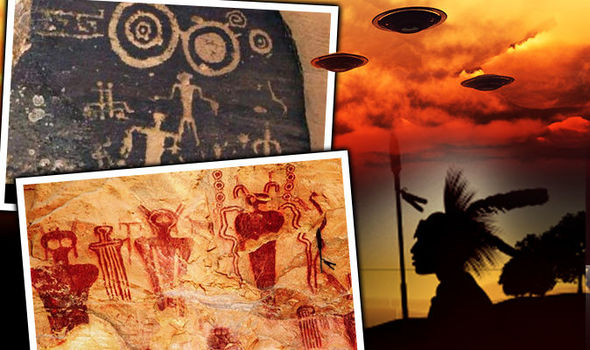 ‘Hopituh Shi-nu-mu’ is the name that one of the Native American tribes is called and means “peaceful people.” The history of the ancient Hopi goes back thousands of years and makes them one of the oldest cultures in the world.

Unlike other mythologies of different cultures which speak of gods that descended from the heavens, in the ancient legends of the Hopi, a different story is told, speaking of mighty gods who reside in the center of the Earth.
But who were they? In a similar way, nearly all pre-Columbian cultures just like the Hopi believe that one day, not too far away, the gods who have shaped human culture will come back to Earth.

They have always lived according to the teachings that were given to them by Masauwu, the Master of the Fourth World, where ethical concepts are deeply rooted in their culture. However, contrary to many other mythologies that are widespread around thew globe, the Hopi believe that their gods do not live in the infinite spaces of the cosmos, but live in the heart of the Earth, conveying the idea of a hollow earth existing right below our feet.

The Hopi speak of “Flying Shields” that flew over the sky. They were run by deities and attacked cities in ancient times.

This legend of the Hopi of the “Flying Shields” has been narrated since the ancient times of America. In the remote past they observed a strange futuristic technology, with a type of circular aircraft that moved through the sky and were driven by beings called Kachina. The Hopi are a Native American tribe descendants of the so-called Old Town that lived in the southwestern United States. Its history is very old, more than 3,000 years old.

The Hopi, the Flying Shields and their deities

According to the mythology of the Hopi, at the beginning of time, Taoiwa, the Creator, created Sotuknang, his nephew, giving him the task of creating nine universes or worlds: one for Taiowa, one for him and the other seven for the overabundance of life. In a cyclical conception of time, in a similar way to Aztec mythology, these worlds would continue cyclically.

The mythology tells that story that the first three worlds, Tokpela, Tokpa, and Kuskurza have already been inhabited and subsequently destroyed due to corruption and wickedness of men. The Hopi speak that the end of each cycle is marked by the return of the gods, and announced by the appearance of the Blue Kachina Star the sign of the ‘Day of Purification,” in which the old world is destroyed, and a new one begins.

Each time one of the worlds is destroyed, the Hopi, the faithful are saved and taken by the gods to the underground cities to escape the destruction of the planet.

In each cyclic destruction, and always according to the mythology of the Hopi, the ‘ant-men’ are crucial for human survival.

The so-called ‘First World’ (Tokpela) was apparently destroyed by the fire of global proportions, perhaps a kind of massive volcanism, or the impact of an asteroid or even a large coronal mass ejection from the Sun of catastrophic proportions.

The ‘Second World’ (Tokpa), however, was destroyed by the cold. Most likely due to a pole shift that caused a massive ice age that destroyed life on the planet.

Interestingly, in the course of these two global cataclysms, the members of the Hopi tribe were guided during the day by a cloud of strange shape and a moving star overnight, leading to the presence of the so-called ‘Ant-Man’ which the Hopi call Anu Sinom.

This creature escorted the Hopi to underground caves where they found shelter and sustenance.

Interestingly, in the ancient Sumerian language, Anum or Anu was the god of the gods. He is the creator of creation.

In the Hopi legend, the mysterious creature that resembled a humanoid-ant is described as a generous and hardworking creature, willing to provide food to the Hopi, and to teach them methods of food preservation so they could survive. According to Frank Waters, author of Mystic Mexico: The advent of the Sixth World of Consciousness (1975) it is in the ‘third world’ where the ancient Hopi introduce the concept of the Patuwvotas, or “flying shields’. In Frank Waters’s writings on Hopi mythology, the Blue Star Kachina or Saquasohuh, is a kachina or spirit, that will signify the coming of the beginning of the new world by appearing in the form of a blue star.

In the third cycle, it is said that humanity built a very advanced civilization, and developed the concept of “flying shields,” a sort of vehicle that can quickly travel to different places in the world and devastate entire cities on Earth. The Third World was destroyed by Sotuknang, the nephew of the Creator, with a great flood.

Also, in this case, there is a clear parallel with the Sumerian tradition in which we talk about the great flood that destroyed all previous civilization on the planet. This story is told in the Epic of Gilgamesh, a text which was then taken to biblical tradition in the history of the Flood and Noah’s Ark. According to the traditions of the Hopi, the survivors of the flood are scattered in different parts of the world, under the guidance of Masauwu, the Spirit of Death and the Master of the Fourth World. A fascinating petroglyph of the Hopi is that where Masauwu is represented piloting a wingless boat that has the shape of a dome. The similarity between the “flying shields” and what we today consider as airplanes or flying saucers, is mind boggling.

It seems evident that the flying shields or ‘ships without wings’ are something ancient cultures around the globe witnessed in the distant past. The ancient Hopi used the term to refer to something that was capable of flying through the skies and transporting people.

The Hopi described their deities as intraterrestrials , which ascended from within the Earth. They called them Ant People, and their imagery reminds a lot of the gray aliens of today. This American tribe exposes the existence of a series of time cycles in the world. In the third cycle it is when they report the presence of the “Flying Shields” ( patuwvotas ) . It is the Third World called Kuskurza , in Hopi language.

That Third World was very advanced , even with what appears to be futuristic technology and ancient astronauts. The Flying Shields were an armament that floated in the sky, capable of attacking cities from long distances and moving in an extremely fast way .

Those who handled the shields were spirits called Kachina , so-called mediators between gods and humans. The flying objects emitted an overwhelming sound : “a thunderous sound (and) a sibilant noise like that of the wind passing through a narrow place …” .

There is an amazing similarity between these artifacts and the flying saucers described by ufology or any other type of stealth military aircraft. That is why this American mythology is part of the folklore of ancient astronauts.

A flood and the destruction of the Third World

The Third World was a period of prosperity and advanced ancient technology , but it came to an end from a deluge generated by the gods.

According to the series Native American Wisdom , “Hopi, following the path of peace” , the god Sotuknang told the beginning of the Fourth World :

Look, I have razed even the traces of its Emergence; The steps I left for you. At the bottom of the seas are all the proud cities, the flying patuwvotas (shields) and the worldly treasures corrupted by evil, and those who found no time to sing the praises of the Creator from the top of their hills. But the day will come, if you keep the memory and the meaning of your Emergence, when these steps will emerge again to prove the truth that you expose ».

During the flood, the red city of Palatkwapi was destroyed . Tiwahongva and his sister Tawiayisnima had been abandoned, and, while camping, they heard a roar. It was Sotuknang, who descended from the sky boarding his paatuwvota (Flying Shield).

God wore a suit that shone like ice and had a twinkling face. The brothers ascended the shield with the god , flying high above the heights. Finally, Sotuknang left them in the village where their parents had settled after the flood.

This legend of the Hopi amazes by the appearance of deities or even ancient astronauts who used a futuristic ancient technology. This tribe thinks that, even today, the Kachina still travel the Earth in Flying Shields! . 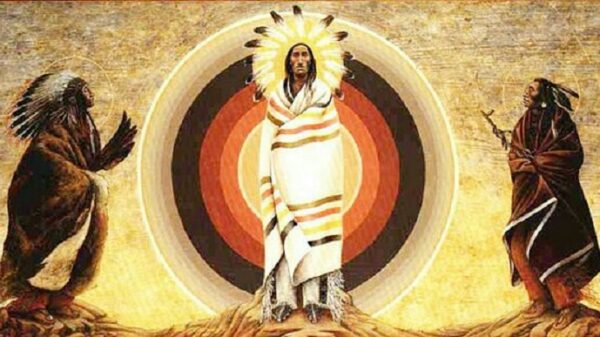 The Hopi Indian tribe is  is a Native American tribe, living in Arizona for several millennia. The so-called aristocracy of this tribe calls themselves the Kachinas. Until...