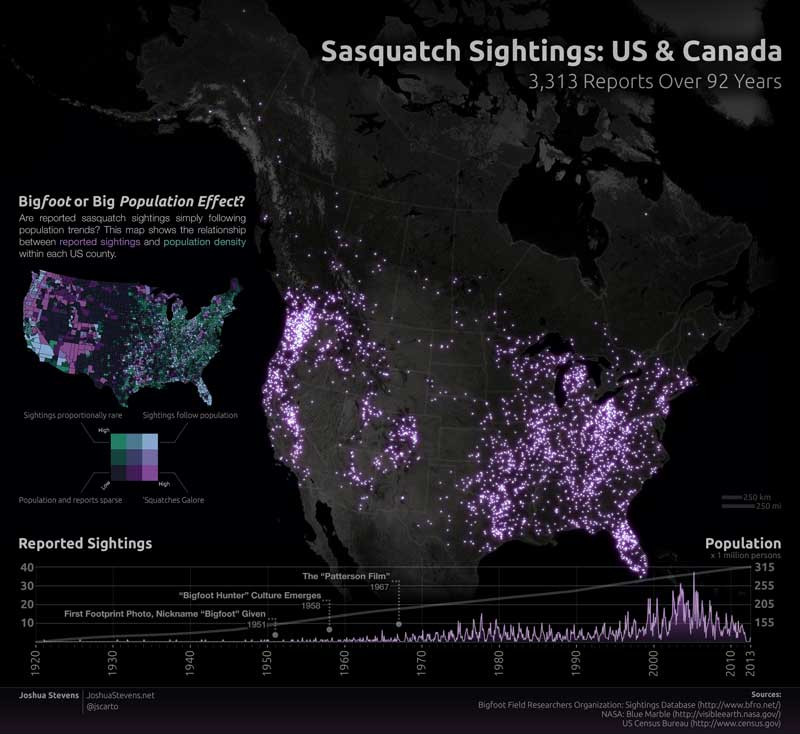 Every now and then a dataset comes along that just has to be mapped. This is one of those times.

Bigfoot. Sasquatch. Skookum. Yahoo. Whatever you call it, the towering man-like ape is a folklore staple. From stories of Yeti in the Himalayas to Wildmen in the Pacific Northwest, people have been talking about and trying to find the creature for ages. Occasionally, some form of evidence – like Patterson’s famous 1967 film – emerges and either feeds our fascination or gets dismissed as a hoax. In either case, it’s easy to see why believers search for proof and skeptics remain doubtful.

Through archival work and reports submitted directly to their website, the Bigfoot Field Researchers Organization has amassed a database of thousands of sasquatch sightings. Each report is geocoded and timestamped. Occasionally, even photos and videos of the alleged evidence are included. I’m not quite sure how I stumbled across this, but I’m glad I did.

After crawling the data and converting it to a more convenient format, I mapped and graphed all 3,313 sightings that were reported from 1921 to 2013 (picture above)

Right away you can see that sightings are not evenly distributed. At first glance, it looks a lot like a map of population distribution. After all, you would expect sightings to be the most frequent in areas where there are a lot of people. But a bivariate view of the data (right) shows a very different story. There are distinct regions where sightings are incredibly common, despite a very sparse population. On the other hand, in some of the most densely populated areas sasquatch sightings are exceedingly rare. 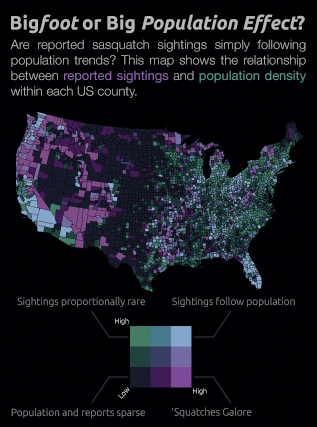 I don’t have a really good explanation for this. These are sasquatch sightings we’re talking about and I’m way out of my area of expertise (do bigfoot experts exist?). But it’s clear that if the legendary biped is real, it’s thriving out west.

The terrain and habitat likely play a major role in the distribution of reports (note: reports, not sasquatch themselves!). Even if bigfoot wasn’t lurking nearby, it might be hard to tell when surrounded by rugged terrain and dense forest. Was that a stick cracking naturally or is a giant primate creeping around? The desire to find, or think you saw, bigfoot might be especially high if you’ve heard tales of giant, ape-like creatures calling the place you’re in home. A combination of environment and legend likely combine to at least put wary outdoorsmen on the lookout. These environmental factors could be explored with a dasymetric map that accounts for the habitat and separates the wilderness from suburbia. Furthermore, the population data are based on the US Census, which is based on where people live. The places we live, and the places we spend the other 50% of our time (at work, traveling, camping, vacationing, etc) are very different. We don’t have data for that, unfortunately.

There’s also inherently some bias in the report data. Being a US-based website, it is dominated by US reports, and the reporting mechanism is not precise: if coordinates are not known (would you really log a GPS reading while staring ‘squatch in the eye?!), the BFRO site only allows reporters to enter the nearest city. This could be many miles away.

Ultimately, I’m not convinced there’s a descendant of Gigantopithecus playing hide and seek in the Pacific Northwest. But if respectable folks like Survivorman Les Stroud and primatologist Jane Goodall believe there’s something more to the myth, I think it’s at least worth putting on the map.

In this article:Bigfoot, map, sightings