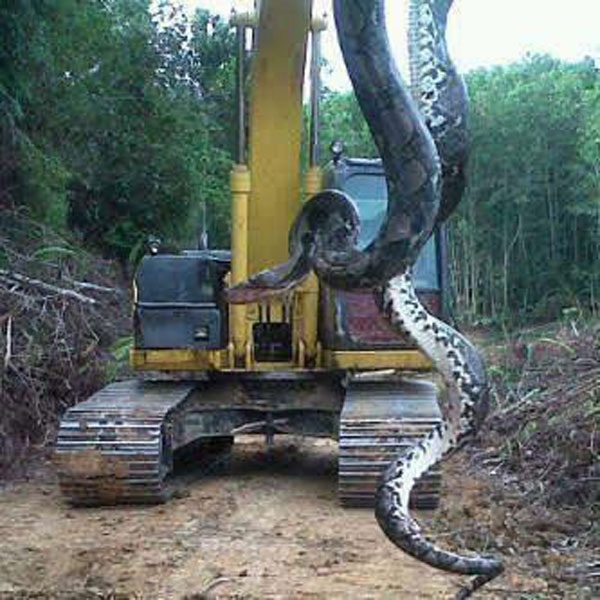 Was a giant 700-pound snake recently killed in Proctor, North Carolina? Two photographs showing what appear to be absolutely enormous snakes are currently going viral — both images feature captions stating that the snakes in question are: over 700 lbs, 98 feet long, man-killers, found in North Carolina, found in Indonesia, etc. Are any of these things true?

In the article below I’ll go over the facts with regards to these photos, and also provide some general information on snakes — including providing information on the maximum sizes that snakes can reach.

With regards to the image posted above, the caption that generally accompanies it states that the snake in question was found in a lake in Proctor, North Carolina, before being killed and pulled from there by an excavation machine. The snake is generally described as being somewhere around 46 to 98 feet long. There are some clear issues with those numbers though — there are no snake species (currently in the world) that grow to anywhere near those lengths, and perhaps more importantly, the snake in the photo is much closer to the camera than any of the other objects in the photo are, thus giving an exaggerated sense of size.

It is clear though that even with exaggeration, that is a very large snake. Something to note — the largest snake specimen ever reported (reputably) was a 32-foot-long reticulated python (Python reticulatus) that was caught in Indonesia in the early 1900s. It is likely possible that they could grow larger, but those would be truly exceptional individuals, and even then they wouldn’t approach the sizes that the above snake is described as being.

The viral photos appear to have originated as part of an Indonesian news article published in late 2012. That article stated that the python was discovered in Indonesia, in the Bangka Belitung Islands province, before being killed and buried. 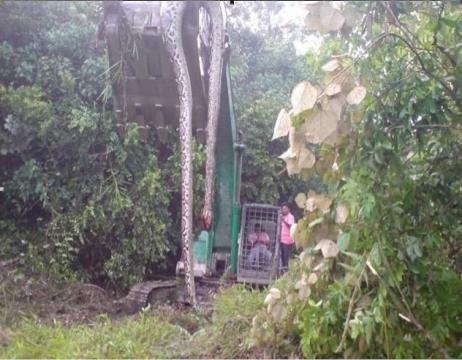 The species in question — the reticulated python — generally “only” grow to sizes of around 20 or so feet, though larger individuals are certainly known to exist. But it is unlikely that even very exceptional individuals could grow to sizes of over 3-4 times what is considered to be normal in the species. With regards to the recent photos — my guess is that those snakes were probably somewhere around 25-30 feet long.

As a side note — the largest snake species to ever exist on the Earth, as far as we know currently, was the titanoboa, which lived somewhere around 58-60 million years ago. Titanoboa cerrejonensis is estimated to have regularly reached sizes of 40-50 feet long and 2000-2500 lbs. It’s thought that the warmer climate at the time may have been part of what allowed the species to reach such gigantic sizes. The species arose shortly after the End-Cretaceous extinction event though, so the loss of large dinosaur competitors may have had something to do with it as well.

And now, in closing, some facts about the reticulated python:

– They are no venomous constrictors — they kill via constrictions .

– They are very good swimmers, and have established populations on many relatively remote islands within their range. Fishermen often report seeing them very far from land, and apparently completely at ease in the ocean.

– Until relatively recently the snake was much more common, but their numbers have been falling in recent years.

– They are primarily ambush hunters.

– Attacks on humans are rare, but they do occur.

– “In 1932, Frank Buck wrote about a teenage boy who was eaten by a pet 25-foot-long reticulated python in the Philippines. According to Buck, the python escaped, and when it was found, a human child’s shape was recognized inside the snake. It turned out to be the son of the snake’s owner.” (Story via Wikipedia)