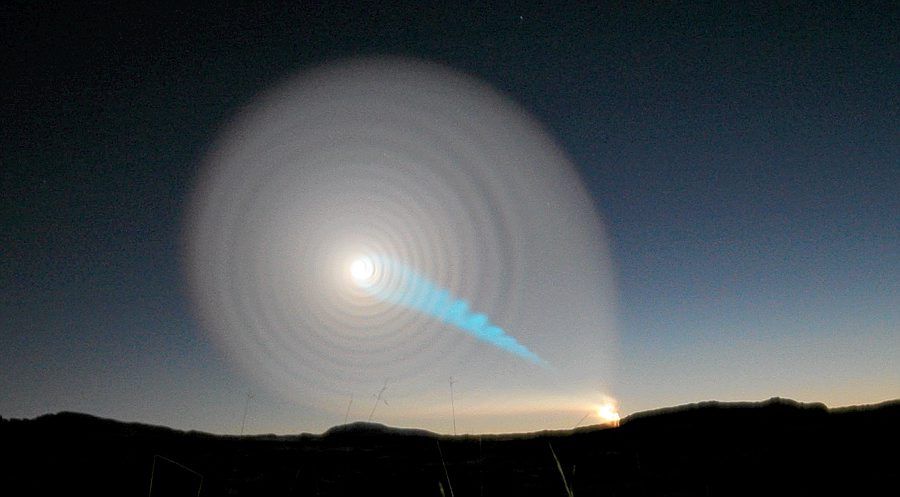 It doesn’t take much to convince people that they’ve seen an experimental missile or a UFO. A funny-looking cloud or an exceptionally bright planet will usually do the trick. Here, our top 7 things that drive space-related hoaxes.

Mysterious UFO sightings may go hand-in-hand with a natural weather phenomenon known as sprites flashes high in the atmosphere triggered by thunderstorms. Sprites suddenly appear when lightning from thunderstorms excites the electric field above the storm, producing dancing flashes of bright light.

Sprites can take the form of fast-paced balls of electricity, although they can also form streaks or tendrils. “Winter sprites” are common in the northern hemisphere during winter months.

In December 2009, a spectacular spiral light show appeared in the sky above northern Norway: A giant spiral, with a green-blue beam of light shooting from its center, lit up the sky in a raindrop-ripple effect pattern.

It looked like a wormhole to another dimension, but it turned out that the lights were caused by a Russian missile that failed just after launch, according to Russia’s defense ministry. The botched Bulava ballistic test missile spun out of control, thus creating the mysterious rotating spiral effect.

Last October, footage of a giant halo in an overcast sky over Moscow surfaced on YouTube. The video had everything needed to ignite UFO rumors. It’s grainy. At one point, a dark pointy object appears to bolt out of the ring. There’s even a panicked-sounding Russian radio broadcast in the background.

Cool-headed meteorologists were quick to put the story to bed: It was just an optical illusion, the cause of sunlight hitting a cloud disturbed by wind or plane traffic in just the right way. Most likely it was what is known as a hole-punch cloud. These occur in cirrus or cirrostratus clouds, which are often composed of ice crystals and super-cooled water droplets water that is below freezing temperature, but still in liquid form. The physical properties that hold these clouds together are delicate, and when disturbed by a jet plane, wind or even cloud seeding efforts the droplets can freeze instantly or evaporate, the latter of which will form the hole.

Unlike Balloon Boy, not all balloon-driven hoaxes are intentional. In the afternoon of Oct. 13, hundreds of people in Manhattan’s Chelsea neighborhood saw a cluster of silvery, shiny lights glittering from above. Naturally, initial descriptions of the supposed UFO varied wildly: Some folks reported seeing one large, slow-moving object full of lights, while others say they saw nearly a half-dozen entities.

The strange, shimmering lights turned out to be caused by 12 helium balloons that escaped from an engagement party held for a teacher at the Milestone School in Mount Vernon,Westchester County, about 15 miles away.The balloons were inadvertently released at 1 p.m., and the first of the “UFO” sightings occurred around 1:30 p.m.

The planet Venus often gets mistaken for a UFO. To viewers on Earth, the second planet from the sun appears as a bright light that hangs in the sunset sky, seeming to slowly hover in the twilight as it outshines every star except for the sun. Because Venus orbits the sun inside our own orbit, from our perspective it constantly darts out on the either side of the sun, which people often mistake for a moving UFO.

Here’s proof that anything funny-looking in the sky can cause an uproar. This past Monday, most of the U.S. woke up to reports that a mystery missile had launched off the coast of California. The sightings were spurred by video of a condensation trail, or contrail, streaking through clouds lit up by the rising sun. No one could conclusively say what it was at the timeofficials at the Department of Defense reported no scheduled missile launches, NORAD and USNORTHCOM detected no foreign activity and the FAA hadn’t cleared any commercial space launches in the area. After a thorough investigation, many experts now believe that the streak was a wait for it a run-of-the-mill jet aircraft contrail that happened to hang around longer than usual. Contrails appear most vivid around sunrise or sunset, and it’s not uncommon that one showing up in an unexpected location will generate whispers of a UFO or experimental military aircraft.

Lights in the sky, especially when viewed by pilots, can also cause a stir, but are almost always revealed to be running lights of other aircraft, or flares dropped by weather research craft.

The late 1940s and early 1950s were a great time for spotting UFOs and aliens in New Mexico, primarily because that’s where the Air Force was conducting some of its top-secret research. One such program was known as Project Mogul and involved floating microphone-carrying balloons to high altitudes in an attempt to pick up the sound waves generated by Soviet atomic bomb tests. The Air Force has since confirmed that a 1947 crash of one of those balloons created the debris that birthed the Roswell UFO Incident.

Another military experiment provided the bodies for that UFO. In the 1950s, Air Force scientists dropped several dozen anthropomorphic dummies from planes to test new high-altitude parachutes and determine whether the bodies would enter a dangerous spin as they fell. Results from these studies contributed to designs for the parachutes and pressurized suits that fighter jet pilots and early astronauts would wear. The Air Force was more than happy to allow Russian spies to think New Mexicans were a little kooky than to reveal the true military origin of the sightings.