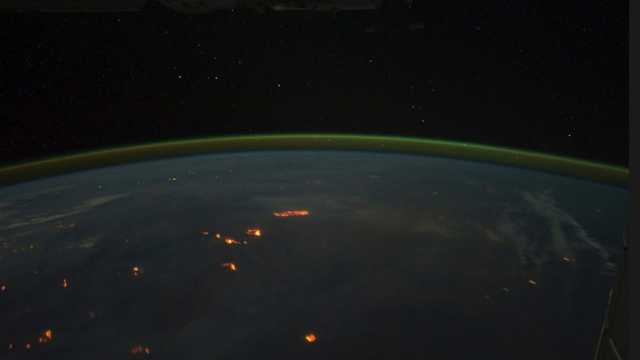 Today, many scientists believe we are on the cusp of a sixth mass extinction which could wipe out most life on Earth as we know it. Here are seven signs that they could be right.

A mass extinction happens when over 75 percent of all species on the planet die in a period of less than two million years. That may sound long to you, but it’s the blink of an eye in geologic time. There have been five mass extinctions on Earth over the past 540 million years, sometimes caused by catastrophic disasters, and sometimes by quiet, insidious events like invasive species taking over the planet.

7. Earth Is Bubbling with Super Volcanoes

Yellowstone Park in the United States is actually a volcano caldera, a thin cork of earth that sits on top of a massive cache of broiling magma. And this super-volcano could blow any time. The last time Earth witnessed an explosion of this size was in 1812, when Mount Tambora in Indonesia erupted so profusely that the Earth’s climate cooled for several years afterwards. Even more frightening is the prospect that another kind of super volcano, called a large igneous province (LIP), could become active sometime in the future.

A now-inactive LIP, called the Siberian Traps, erupted 250 million years ago. It spewed so much sulfur, carbon other greenhouse gases into the air that the Earth experienced a climate change catastrophe, vacillating wildly between extreme heat and cold until 95 percent of all life had died. This mass extinction was so bad it’s been nicknamed “the Great Dying” by geologists. Yellowstone is not a LIP, but if it explodes into a super eruption, the damage will be incredible. Super volcanoes are an ever-present threat, that have haunted the Earth for millions of years.

On Earth, humans have aggressively invaded every continent except Antarctica, swelling our population to over 7 billion individuals and eating everything in sight. Like rats and cockroaches, we are the ultimate invasive species, pushing many creatures out of their native habitats which could, ultimately, kill those creatures on a huge scale. Our population could grow a lot bigger before humans are endangered, but that doesn’t mean we wouldn’t harm other species. About 359 million years ago, 75 percent of all species on Earth died during the Devonian mass extinction. Geologist Alicia Stigall has evidence that this horrific slaughter was the result of invasive species like sharks (yes, there were sharks hundreds of millions of years ago) aggressively eating all the food in every environment slowly starving all the creatures who depended on local food sources and couldn’t move to new feeding regions.

The Arctic ice cap is shrinking. Temperatures are rising. Scientists across many disciplines and countries are united in their belief that the climate on Earth is getting hotter. The good news is that humans might not be the only cause of this climate change the planet has suffered through dramatic shifts in temperature many times over its history. The bad news is that pretty much every time that happens there’s a mass extinction. The Great Dying was caused by climate change. The very first mass extinction 540 million years ago, called the Ordovician Extinction, was set off by a rapid ice age followed by a rapid greenhouse period. Another mass extinction, at the end of the Triassic, was set in motion by an undersea super volcano and massive wildfires (like the ones in Australia, pictured from space in the image at the top of this post) that smothered the planet in smoke and ash. The meteorite that smashed into the planet before the dinosaurs were wiped out in a mass extinction? Nope, didn’t kill those big guys with fire. It killed them by throwing so much debris into the atmosphere that the climate changed. Most geologists agree that when the climate changes, mass extinctions follow.

Acid levels in the Earth’s oceans are going up, which is what’s killing all those reefs and making life hard for shellfish. Ocean acidification is also one major reason that the Great Dying was so, well, great. It was also a major part of the Triassic mass extinction 200 million years ago, which wiped out 80 percent of the planet’s species especially in the oceans. When the waters are too acidic, calcium levels go down. That means shelled creatures simply can’t build their shells, and they die even before they have a fighting chance. When shelled creatures die, the predators who feed on them also die. And the more dead bodies you’ve got in the ocean, the more acidic everything gets. If Earth’s oceans continue to become more acidic, mass extinction could be next.

3. Extinctions Are Happening At A Higher Than Average Rate

Extinctions are normal. In fact, statisticians who study extinction have figured out a typical “background extinction rate,” which is the normal number of creatures who are going extinct at any given time. So a mass extinction is like a big statistical spike of death sticking up far over that background rate. And, unfortunately, there is a lot of evidence that the extinction rate we’ve experienced over the past 500 years is above the typical rate. No, this rate is nowhere near mass extinction levels. But it is going up. Which is exactly what you’d expect to see at the beginning of a mass extinction.

2. All the Megafauna Are Dead

One way scientists figure out rates of extinction is by looking at the diversity of fossils. Based on this evidence, they can figure out how many creatures and plants were alive at a given time, plus how quickly (or slowly) they disappeared from the fossil record. In recent fossil records, from the past 50,000 years, we can easily see a steep decline in species diversity. The Earth was recently home to many species of so-called megafauna, from mastodons and giant wallabies, to giant sloths, and today they are entirely gone. When you see an entire category of creatures wink out that quickly (in geological time), it suggests more than just typical extinction patterns.

1. Amphibians Are Dying Out

Today, we are witnessing another giant group of species going extinct so rapidly we can actually measure it in human time, rather than geologic time. Amphibians, especially frogs, are dying out at such a fast pace that some have called the twenty-first century a time of “biodiversity crisis.” Most have been felled by a fast-spreading, deadly fungus that kills whole communities of frogs in weeks. It’s likely the fungus has reached pandemic proportions because frogs are being forced out of their habitats, and coming into contact with new species they might never have seen otherwise. Just as human pandemics spread more quickly due to travel, amphibian pandemics are spread when frogs move into a new area and infect previously unexposed communities. The more we lose our animal diversity, the closer we get to a world dominated by invasive species. And that scenario really didn’t end well in the Devonian mass extinction. It probably won’t end well for us, either.

Still, as I explain in my book, Scatter, Adapt, and Remember: How Humans Will Survive a Mass Extinction, there is hope. These are early signs of a possible mass extinction, and we still have plenty of time to do something about it. We can curb fossil fuel emissions to prevent climate change from getting worse, and we can preserve biodiversity by maintaining natural areas where animals won’t be edged out by human settlements. As for megavolcanos and meteorite impacts? Well, that’s going to be a little harder. But it’s not impossible. We can’t bring the mastodons back, but we can still prevent most of the species around us (including humans) from dying out.