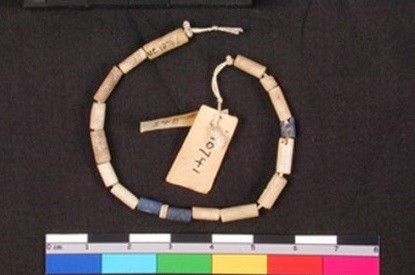 The International Business Times reports on the interplanetary origins of ancient human culture:

A set of funeral beads which could be the oldest iron artifacts on earth actually came from outer space, archaeologists have claimed.

The nine iron beads, which were found in a 5000-year-old Egyptian cemetery in 1911, were made from a meteorite that crashed to earth around 3200 BC, according to a study published in the Journal of Archaeological Science.

“These beads were made from meteoritic iron, and shaped by careful hammering of the metal into thin sheets before rolling them into tubes,” researchers noted, adding that neutron and X-ray scanning of the iron beads proved that the metal came from a meteorite.

The iron was strung into a necklace together with other exotic minerals such as lapis lazuli, gold and carnelian. The findings suggest that iron and metal works were much advanced in the ancient Egypt than previously thought.