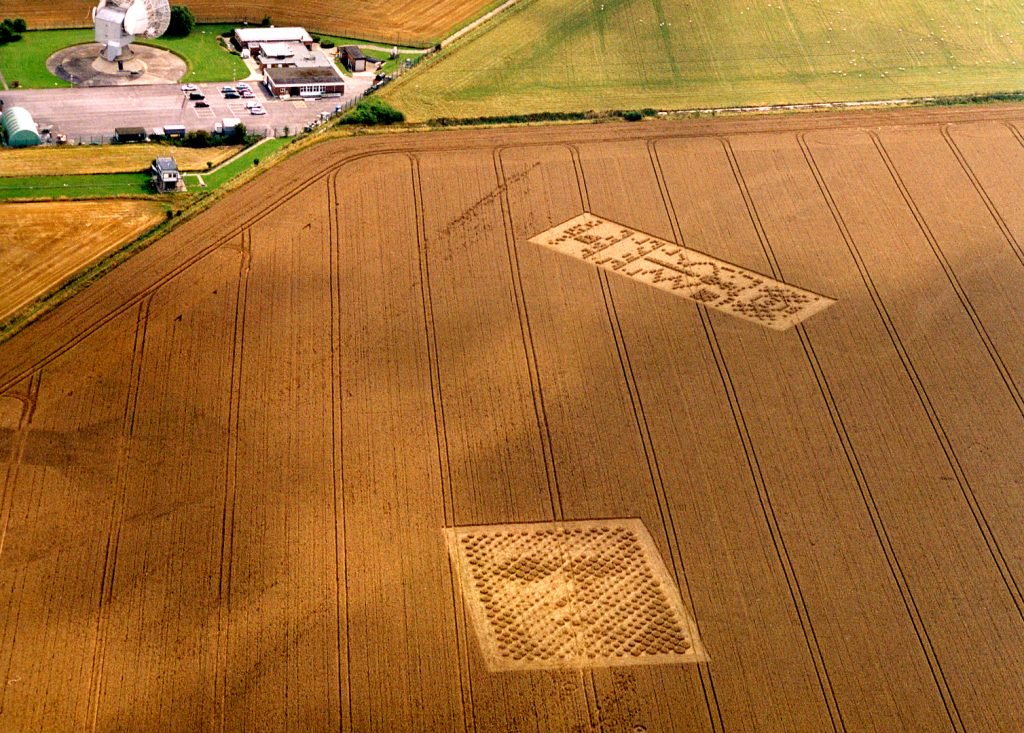 In 1974, a broadcast (known as the “Arecibo” message) put together by Carl Sagan and colleagues was sent into space via radio waves at a special ceremony to celebrate the remodelling of the Arecibo radio telescope in Puerto Rico. It was the most powerful broadcast ever deliberately beamed out into space. Directed at a star cluster sitting approximately 25,000 light years away, it consisted of a pictorial message depicting our planet’s location in our solar system, the core principles of our math and science, and the NASA antenna used to transmit the signal in the hopes that it would be interpreted by an extraterrestrial intelligence. The message also included details about human beings, such as our physical appearance and DNA code. The signal was a million times stronger than the typical TV transmission. You can see the message in the cover photo (above).

27 years later, in 2001, the crop circle phenomenon gained some well-deserved attention when a pattern in the form of a response to the 1974 broadcast appeared right next to Britain’s largest telescope, the Chilbolton, and observatory, home to the world’s largest fully steerable meteorological radar. It’s one of the most amazing crop circles to ever appear, regardless of whether you believe it was done by human beings or an extraterrestrial intelligence 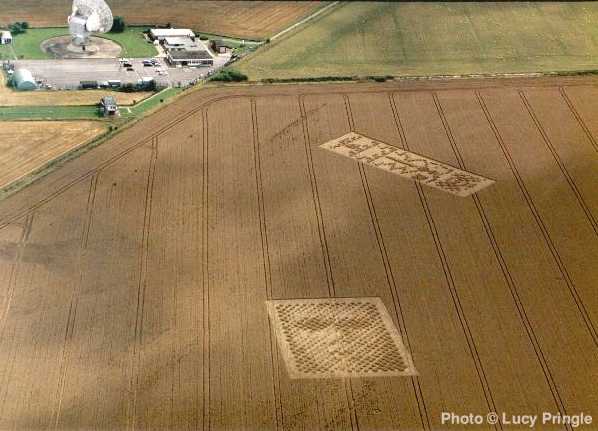 Above is a picture of what seems to be the response to the message sent out in 1974 by NASA (see cover photo). The message describes a different solar system, an image of the sender (just like on the original NASA message), non-human DNA, and a microwave antenna instead of the radio-wave antenna that was depicted in ours.

A simple Google search would suffice if you want to see more pictures. It was written off as a hoax, like most crop circles are within the mainstream.

The face you see there appeared three days before the rectangular image. The face represented a new technique in crop circle generation, a screen technique that is also used for printing a face on a piece of paper.

What’s also interesting to note is the fact that the microwave antenna signal in this crop circle also appeared a year earlier in the exact same field. You can view an image of that one here.

The Arecibo message sent out into space was in binary, and I thought it would be fitting to source a declassified NSA (National Security Agency) document titled “Key To The Extraterrestrial Messages.” This document reveals that they received a series of 29 messages from outer space that also appear to be in some binary form. The title of the document alone is quite shocking given the fact that it comes straight from the NSA.

Some Things You Might Not Know About Crop Circles

Not many people are aware of the fact that crop circles happen all over the world and there have been reports of them for decades. Some of their designs are so complex and elaborate that they’ve completely baffled onlookers, researchers, and scientists alike. Not only that, many of the designs are often electrostatically charged, usually with the nodes of some of the plant stalks blasted out on one side. Some of them are also littered with strange magnetic particles. This effect has been replicated by highly localized microwave heating, which causes water inside the plants to vaporize and dislodge, thus flopping the stock completely over to one side.

This fact has led some physicists to publish work on the phenomenon, concluding that the perpetrators (who have never been caught in the act of making a crop circle, anywhere) are using GPS devices, lasers, and microwaves to create these astonishing geometric forms. (source)

According to Richard Taylor, director of the Materials Science Institute at the University of Oregon: “Crop circle artists are not going to give up their secrets easily. This summer, unknown artists will venture into the countryside close to your homes and carry out their craft, safe in the knowledge that they are continuing the legacy of the most science-oriented art movement in history.”  (source)

Other physicists, like Dr. Terence Meadon, have explained that the light energy involved is a result of atmospheric phenomena.

So, if the circle makers are indeed human, we are looking at an extremely advanced/artistic group of people with a tremendous amount of resources at their disposal.

What are your thoughts on the crop circle phenomenon? Feel free to share in the comment section below.

In this article:Arecibo, crop circle phenomenon