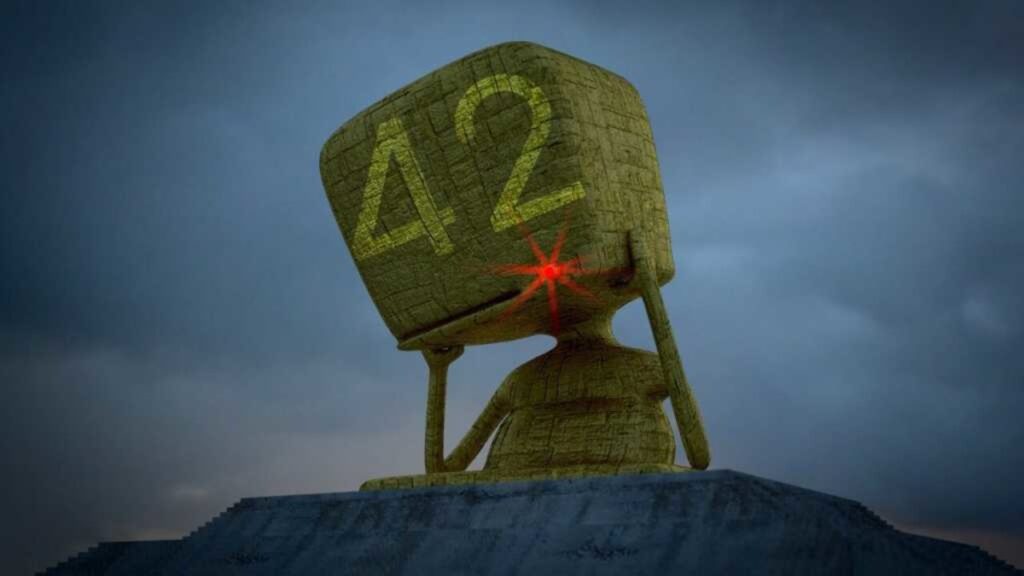 The cult novel Hitchhiker’s Guide to the Galaxy answers “The Ultimate Question of Life, the Universe and Everything.” This answer was supposed to solve all the pressing problems existing in the world. A specially created supercomputer, the most powerful in the Universe, was looking for it in the process of seven and a half million years of continuous calculations, and all intelligent races were waiting for it. When this answer was finally received, it read: “42”.

Is this number really so important, powerful and mysterious, or is it just idle inventions of a science fiction writer? Let’s not listen to charlatans from numerology, but turn to the irrefutable facts that permeate our whole life.

Let’s start with the universe. The Dutch astronomer Jorg Rachen, involved in the Planck space observatory project, and the German philosopher Ute Gahlings have published a paper indicating that the basic parameters of the standard cosmological model can be obtained by combining just three numbers: 23, 42 and pi.

The authors formulated a concept that they called conspiracy cosmology, since the patterns they identified prompted them to think that the main parameters of our Universe are not random, but set by some higher forces involved in its creation.

Strictly speaking, modern astrophysics quite confidently traces the history of the Universe almost up to the very moment of the Big Bang, which gave rise to it. However, what happened before that (if, of course, we can use the term “before that”, because time as such in our understanding did not exist then), we do not know. We simply do not have any physical or methodological tools to find out. Moreover, physics and astrophysics are able to answer the question “How?” With the question “Why?” – much more difficult.

Why do such fundamental constants as Planck’s constant or the charge of an electron have exactly the same and not other meanings? Why is the speed of light in emptiness exactly 300 thousand km / s? In cosmology, there is a so-called. the anthropic principle, according to which it makes no sense to seek explanations for some of the features of the Universe we observe; they are just that, simply because we have managed to appear in the Universe with just such properties. And we simply do not see other universes with different characteristics (it must be said that in the last two decades, quite a lot of theoretical works have appeared that seriously investigate the possibility of a plurality of universes).

As for the question “Why?”, then no natural sciences, in principle, are able to give an answer to it – it belongs to the competence of philosophy. Why was the universe created if it was created? Different philosophers and theologians have many answers.

Meanwhile, none of the facts known to science today contradict the hypothesis that it was created as a result of a purposeful act of creation, although there is no evidence to the contrary. Famed British astrophysicist Stephen Hawking, who has been confined to a wheelchair for many years, is currently working on a comprehensive “M-theory” or “Theory of Everything” to fill in the gaps left by Einstein’s superstring theory and general relativity. At one time, Hawking came to the conclusion that to start the process of the formation of our Universe, God (or some kind of omnipotent, by our standards, intelligent force, which we could call that) is completely unnecessary.

Nevertheless, recently Bank of America Merrill Lynch, in a briefing note to its clients, put forward a theory that with a probability of 20% to 50%, our entire Universe and humanity in particular are an object of computer modeling, i.e. exist in a kind of matrix, and this was not an April Fool’s joke. Elon Musk is more categorical: according to his point of view, the chance that we exist in objective reality does not exceed one in several billion.

So, what is the “conspiracy cosmogony” of Rachen and Hachlings?

The next number they allocate is 42

If you write it in the binary system, you get 101010 – a pair of 10 three times – which leads to the number 23. Combining these two numbers with the number Pi, it turns out, you can get a set of basic parameters of the modern cosmological model. For example, the share of baryonic matter in the Universe is 42/1000 of the total amount of matter. The value of the Hubble constant, which characterizes the expansion rate of the Universe H0 = 72 (km / s) / Mpc, is almost equal to 23 * Pi. The share of dark matter is 23 percent, and the share of mysterious dark energy is 72 percent of the total gravitational energy of the Universe, which is again equal to 23 * Pi.

The product 23 * 42 = 966, called by the authors the super-conspirological constant, clearly corresponds to the value of 0.966, which is close to the index of the spectrum of the initial perturbations of the density of matter, which, as the results of the Planck mission showed, somewhat differs from unity.

The authors come to the conclusion that such coincidences are hardly accidental and that either our Universe was created by some intelligent force, or the Universe in the usual sense of this word does not exist at all and the whole world is nothing more than an illusion. For example, a computer program created for some special purpose, known only to its creators, which the authors call the capacious word “they”. Which is quite consistent with the warning from Bank of America Merrill Lynch and the point of view of Elon Musk.

Assuming for a moment that Rachen and Gachlings’ theory is correct, the meaning of the answer, never understood by the characters of Douglas Adams, becomes clearer. After all, the number 42 is the main constant embedded in the structure of our Universe by its hypothetical creators. With this approach, the excessively frequent, from the point of view of the theory of probability, cases when this number plays a significant role in our life and death, and even in the fate of the whole world, are no longer surprising. After all, the theory of probability examines random events, and this number was embedded in the fabric of the universe, as they say, “by design.”

The Great Orion Nebula is the brightest diffuse object visible in the sky with the naked eye, known since antiquity and very strongly stimulated the development of astronomy at one time. The 17th century French astronomer Charles Messier, who created the first ever catalog of nebulae and assigned it number 42, clearly knew nothing about the theory of Rachen and Hachlings.

TTTAATTGAAAGAAGTTAATTGAATGAAAATGATCAACTAAG – this is how the DNA sequence common to all vertebrates looks like. This entry has 42 characters.

All mercury medical thermometers are marked “42” in red. It is at this temperature that the blood protein coagulates and the person dies.

Let’s move on from natural science to theology and philosophy. The special meaning of the number 42 can be discerned by how often it appears in all religions and how important it plays in them.

The ancient Egyptians associated two numbers with the life of the god Osiris – 28 (the number of days in the lunar month) and 14 (according to legend, the body of Osiris was dismembered into 14 parts, which is an allegory reflecting the waning of the moon from full moon to new moon in 14 days). These two numbers add up to 42.

The prayer “Ana be koah” consists of seven lines, and each line contains six words. If you add up the first letters of all these words, you get the name of God. It is allowed to study Kabbalah only after reaching 42 years of age.

The destinies of rulers, war and peace, as it turns out, are also closely related to this number.

However, if you wish, you can find a great many more similar facts. It is much more interesting to see how this number is woven into the fabric of simple human destinies, sometimes it makes an absolutely stunning impression.

Meanwhile, creative intelligence around the world have long used the number 42; if they want a number, why not use that? A kind of worldwide flash mob.

On September 6, 2019 scientists from the University of Bristol and the Massachusetts Institute of Technology made a mathematical discovery.

Experts have written a Diophantine equation for the number 42, which they have tried unsuccessfully since 1954. One of these in the third century BC was proposed by the ancient Greek mathematician Diophantus of Alexandria. It looks like this: x ^ 3 + y ^ 3 + z ^ 3 = k. The essence of the problem is to select an integer from one to one hundred (for example, 8) and select suitable variables for it (in our case, these are 2, 1 and -1).

If even seventh-graders do not have problems with the number 8, then some numbers put the scientists and their computers at a standstill due to the impossibility of choosing the correct solution – 33 and 42. They required too large components that were not suitable for calculations. However, that all changed in 2019 when Professor Andrew Brooker took over.

The expert found the answer for the number 33, and then turned to a colleague from the Massachusetts Institute of Technology, Andrew Sutherland, to finish the job – to deal with the riddle of the number 42. For the calculations, the scientists used the Charity Engine, a program that operates with the power of more than 500 thousand PCs of users from all over the world, as reported by EurekAlert.

As a result, after millions of hours of computing, Brooker and Sutherland found the answer (not very magical):

Finally, mathematicians can say that they wrote Diophantine equations for all possible coefficients from one to one hundred (even for the number 42). The answer risks sounding boring, but it represents a solution to a 65-year-old math problem. Here is what Professor Brooker said about this:

I feel relieved. This is a game in which you cannot be sure that you will come to success. A bit like trying to predict an earthquake: we can only start from rough assumptions. We can find what we are looking for in a few months, or we can find a solution only in a century.

In this article:42, mysterious numbers