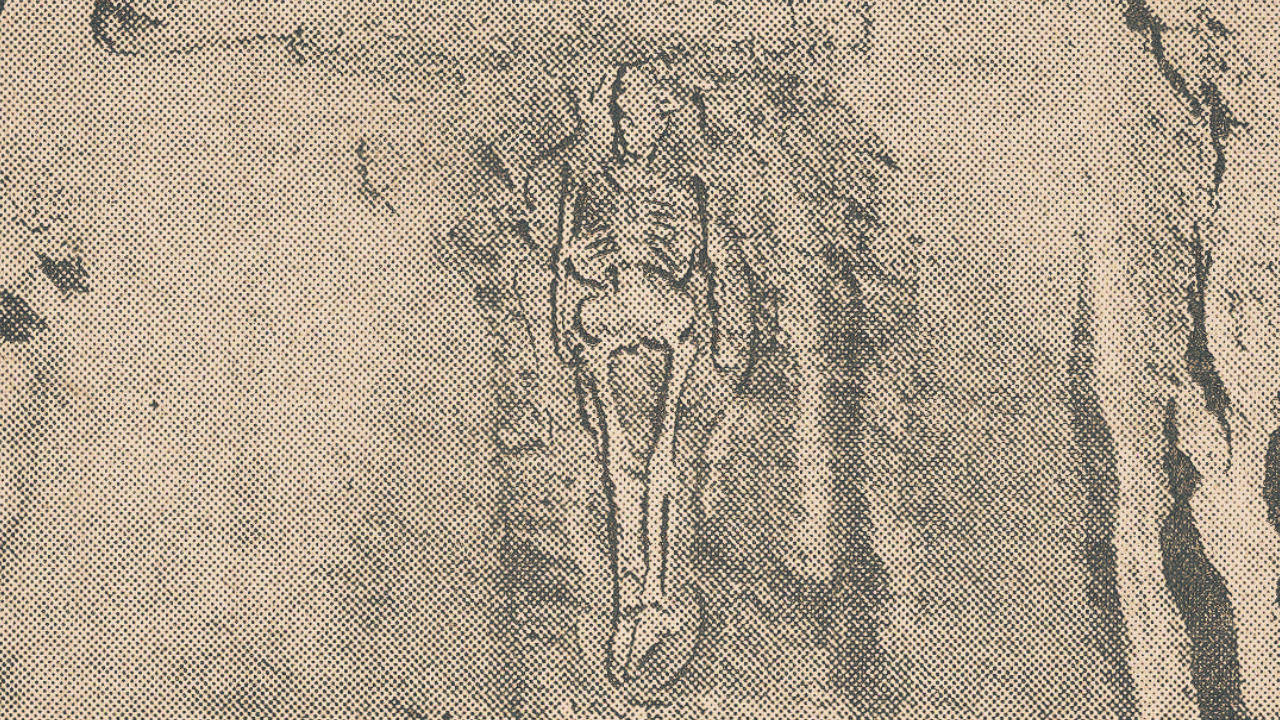 Most people don’t know it, but there were actually tons and tons of mainstream articles written in newspapers in the 1800’s and early 1900’s reporting that giant human skeletons have been found.

This is an avalanche of credible information about giant human skeletons. So where did the skeletons go? 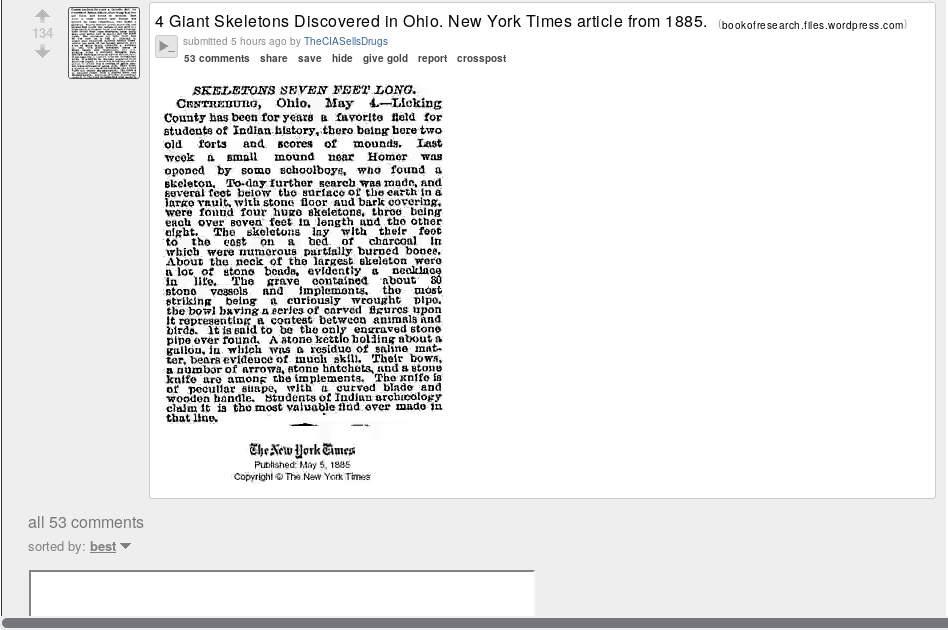 This is the article published about 4 giant skeletons. It isn’t the only one of its kind.

One NY Times article from November 21, 1856 which is still available in archive form on the NY Times website with all the others, bears the headline “SKELETON OF A GIANT FOUND.” It reads:

“A day or two since, some workmen engaged in subsoiling the grounds of Sheriff WICKHAN, at his vineyard in East Wheeling, came across a human skeleton. Although much decayed, there was little difficulty in identifying it, by placing the bones, which could not have belonged to others than a human body, in their original position.”

On this archive website, it is even possible to find a list of old articles from the 1800’s about giants. Keep in mind these are mainstream articles from when today’s outlets were in their infancy, from outlets such as the New York Times or London Globe. According to rules of credibility imposed on us by the mainstream paradigm, this is the epitome of credible.

A 1868 article published at the NY Times is titled “Reported Discovery of a Huge Skeleton.” It says:

“Day before yesterday, while the quarrymen employed by the Sank Rapids Water Power Company were engaged in quarrying rock for the dam which is being erected across the Mississippi, at this place, found imbedded in the solid granite rock the remains of a human being of gigantic status.”

Another NY Times article from September 8, 1871 is titled “More Big Indians Found in Virginia.” It reads:

“Not to be behind Canda, Virginia puts in a claim of the possession of a cave full of dead Indians, the Peterburg Indez giving the tale as quoted below, on the authority of gentlemen whom it asserts to be of the highest character and credit.”

“MAY’S LANDING, N.J., Feb. 8. — For over a week past crowds have been flocking to the site of the unearthed Indian graveyard near Edgewateravenue in Pleasantville. The first lot of skeletons unearthed was about one thousand yards from the city Post Office and embraced eight bodies, closely laid together in a deep chamber, snugly packed in with tortoise, oyster, and clam shells.”

Anybody interested in researching this can scan through this archive or look at the screencapped images of the archive below. 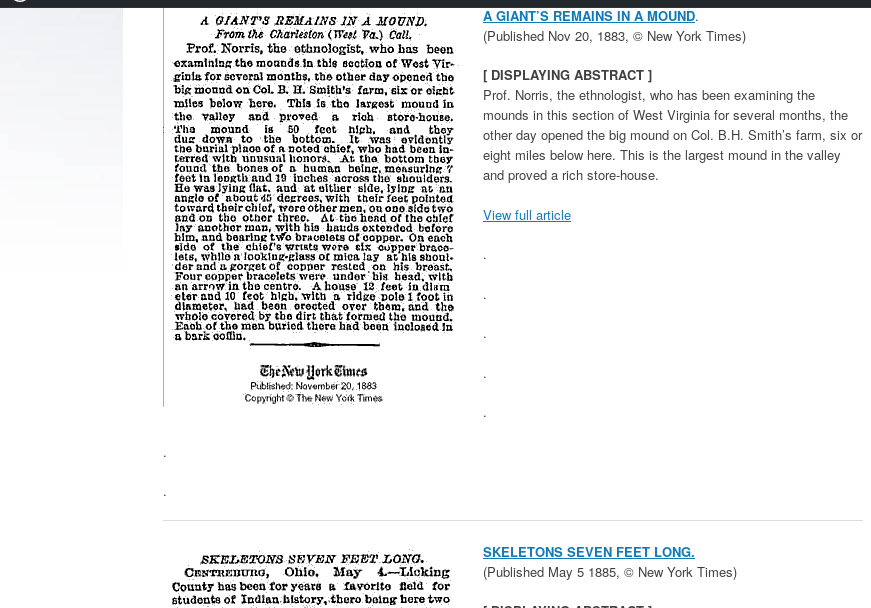 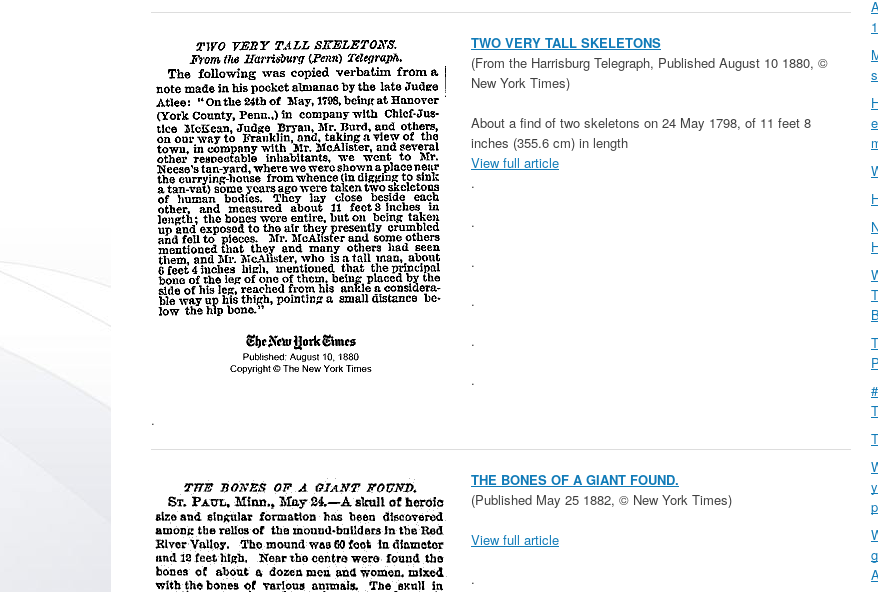 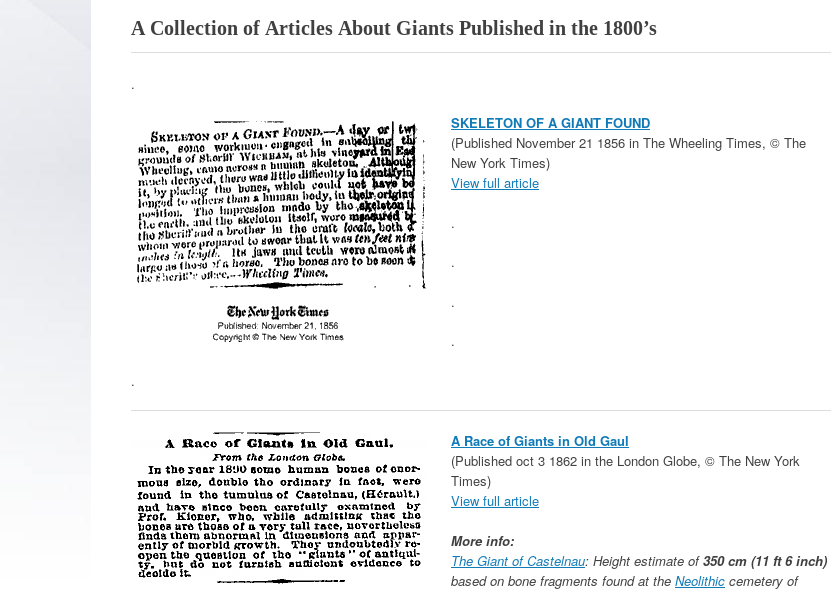