June 23, 1988 marked the date on which climate change became a national issue.

In landmark testimony before the US Senate Energy and Natural Resources Committee, James Hansen, then director of NASA’s Institute for Space Studies, stated that:

Hansen’s testimony made clear the threats posed by climate change and attributed the phenomenon to human exploitation of carbon energy sources. Its impact was dramatic, capturing headlines in The New York Times and other major newspapers. 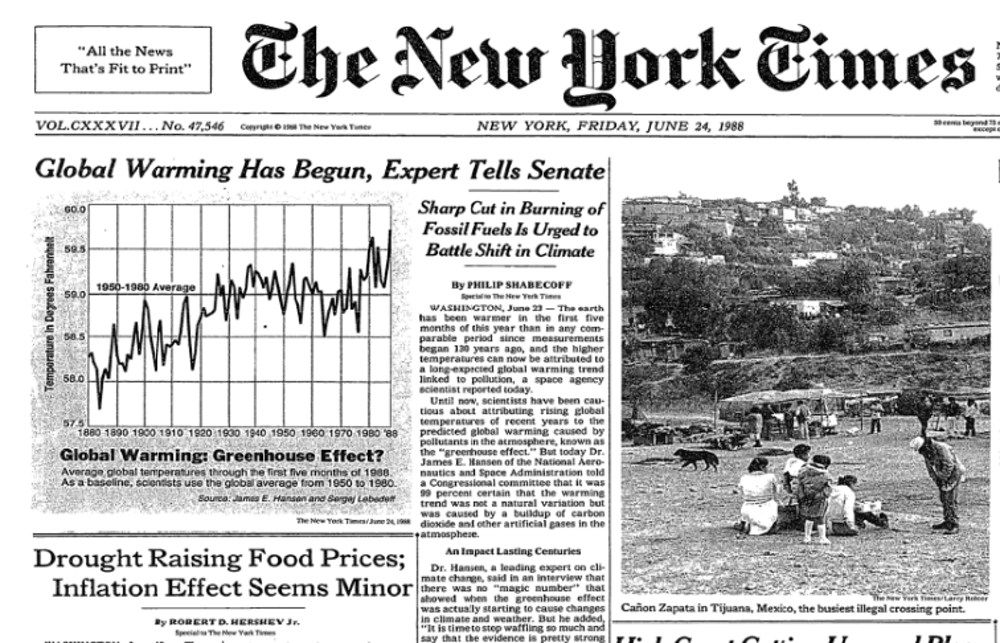 As politicians, corporations and environmental organizations acknowledged and began to address this issue, climate change entered into the political arena in a largely nonpartisan fashion.

Yet despite decades of public education on climate change and international negotiations to address it, progress continues to stall. Why?

One reason for the political inaction is the gaping divide in public opinion that resulted from a deliberate – and still controversial – misinformation campaign to redirect the public discussion on climate change in the years following Hansen’s testimony. 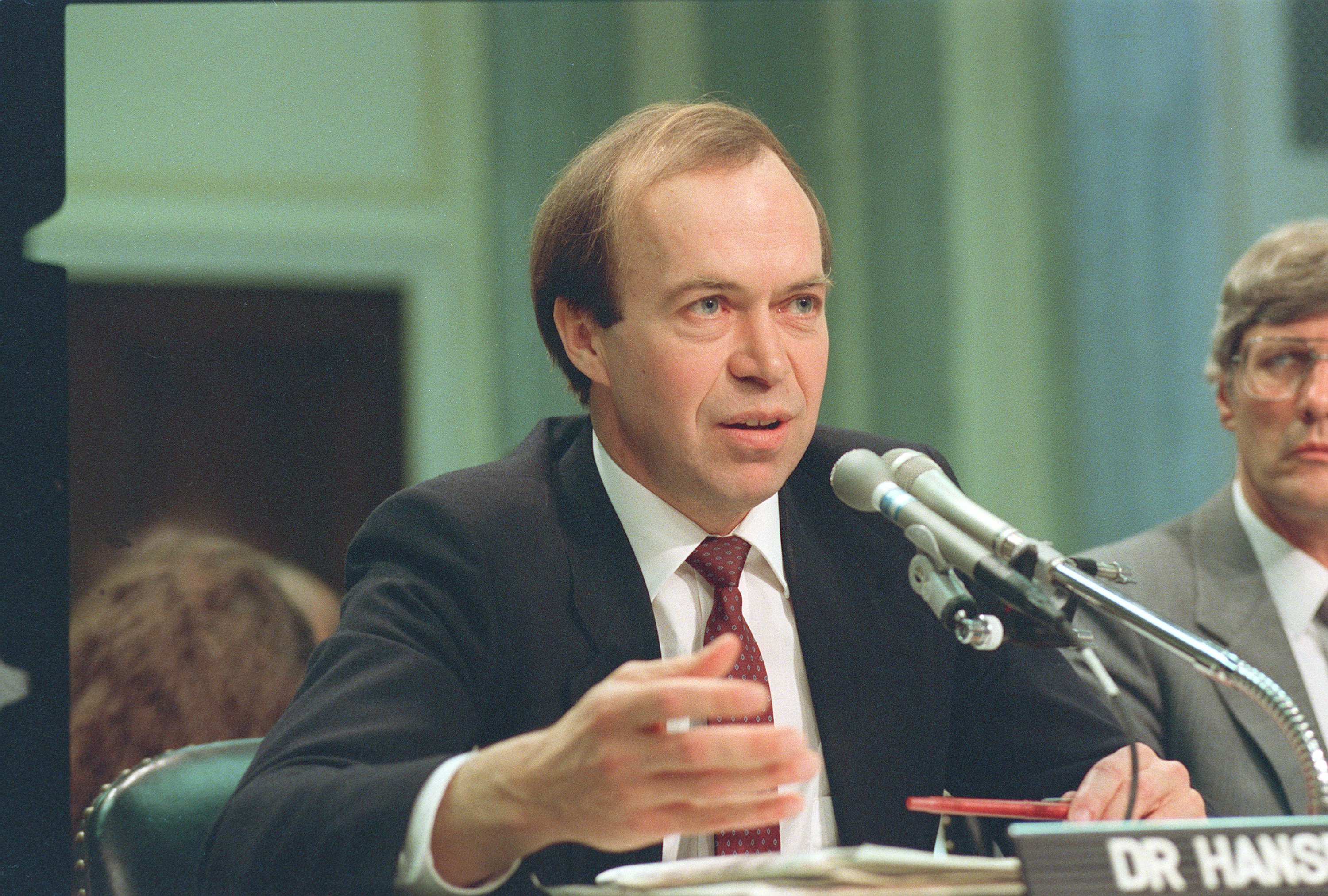 They committed themselves to reducing carbon emissions to avoid dangerous disruption of the Earth’s climate system, defined as limiting future temperature increases to 2 degrees Celsius.

The signatories have now held 25 annual UNFCCC conferences dedicated to developing goals, timetables and methods for mitigating climate change, the most consequential of which are encompassed in the Paris Agreement of 2015.

But as of today, not one single major northern industrial country has fulfilled its commitments under the Paris treaty, and the nonprofit Climate Action Tracker has rated the United States’ plan to achieve the Paris goals critically insufficient.

There have been more than 600 congressional hearings on climate change, according to my calculations, and numerous attempts to pass binding limits on carbon emissions.

Despite those efforts, the United States has yet to take meaningful action on the problem – a discrepancy compounded by President Donald Trump’s decision last year to withdraw from the treaty altogether.

In the three decades since Hansen’s testimony, the scientific certainty about the human causes and catastrophic effects of climate change on the biosphere and social systems has only grown stronger.

This has been documented in five Intergovernmental Panel on Climate Change assessment reports, three US National Climate Assessments and thousands of peer-reviewed papers.

Yet CO2 levels continue to rise.

In 1988, atmospheric CO2 levels stood at 353 parts per million, or ppm, the way to measure the concentration of CO2 molecules in the atmosphere. As of June 2018, they have reached 411 ppm, the highest monthly average ever recorded.

The effects of these increased concentrations are just as Hansen and others predicted, from disastrous wildfires in the western US and massive hurricanes associated with historical flooding to extended droughts, rising sea levels, increasing ocean acidification, the pervasive spread of tropical diseases and the bleaching and death of coral reefs.

Future generations will look back on our tepid response to global climate disruption and wonder why the world did not act sooner and more aggressively.

One answer can be found in the polarization of public opinion over climate change in the United States.

Clearly, a massive gap between Republicans and Democrats has emerged regarding the nature and seriousness of climate change.

This partisan divide has led to an extreme political conflict over the need for climate action and helps to explain Congress’s failure to pass meaningful legislation to reduce carbon emissions.

The current political stalemate is no accident. Rather, it is the result of a well-financed and sustained campaign by vested interests to develop and promulgate misinformation about climate science.

My scholarship documents the coordinated efforts of conservative foundations and fossil fuel corporations to promote uncertainty about the existence and causes of climate change and thus reduce public concern over the issue.

Amplified by conservative media, this campaign has significantly altered the nature of the public debate.

These findings are supported by recent investigative news reports showing that since the 1970s, top executives in the fossil fuel industry have been well aware of the evidence that their products amplify climate warming emissions.

Indeed, industry scientists had conducted their own extensive research on the topic and participated in contemporaneous scientific discussions.

The American Petroleum Institute, an industry trade group, even circulated these research results to its members.

By 1978, a senior executive at ExxonMobil had proposed creating a worldwide “CO2 in the Atmosphere” research and development program to determine an appropriate response to growing evidence of climate change.

Unfortunately, that path wasn’t taken. Instead, in 1989, a group of fossil fuel corporations, utilities and automobile manufacturers banded together to form the Global Climate Coalition.

The group was convened to prevent the US adoption of the Kyoto Protocol, an international agreement to limit greenhouse gas emissions. In its public statements, the coalition’s official position was to claim global warming was real but that it could be part of a natural warming trend.

The corporate drive to spread climate misinformation continued beyond fighting Kyoto. In 1998, API, Exxon, Chevron, Southern Co. and various conservative think tanks initiated a broad public relations campaign with a goal of ensuring that the “recognition of uncertainties of climate science becomes part of the ‘conventional wisdom.’”

While that coalition disbanded in 2001, ExxonMobil reportedly continued to quietly fund climate misinformation, funneling donations through conservative, “skeptic” think tanks such as the Heartland Institute, until 2006, when the nonprofit Union of Concerned Scientists exposed its funding scheme.

ExxonMobil – the nation’s largest and wealthiest company – continues to work with the American Legislative Exchange Council, a self-described public-private partnership of corporations and conservative legislators, to block climate change policies.

ExxonMobil’s conduct – promoting uncertainty about climate science it knew to be accurate – has generated public outrage and led New York’s attorney general to initiate an investigation into whether the company has illegally misled the public and its investors about the risks of climate change.

This trend in litigation has expanded, and there are now several ongoing climate litigation suits.

Just as Congress investigated efforts by the tobacco industry to dupe the public into believing its products were harmless in the 1990s, I believe a full and open inquiry is needed now to unmask the vested interests behind scientific misinformation campaigns that continue to delay our efforts to mitigate a global threat.

At a minimum, the US needs to change the system of hidden funding, in which companies such as ExxonMobil or the Koch brothers use pass-through organizations to camouflage donations to climate denial efforts.

Current US tax rules for nonprofit organizations, including climate-denying think tanks, do not require them to reveal their donors, enabling them to support large-scale political activities while remaining unaccountable.

American voters deserve to know who is behind climate disinformation efforts, and revising nonprofit reporting laws is a good place to begin.

In my view, the central concern here is nothing less than the moral integrity of the public sphere. The Declaration of Independence states that governments “derive their just powers from the consent of the governed.”

But when vested interests with outsize economic and cultural power distort the public debate by introducing falsehoods, the integrity of Americans’ deliberations is compromised.

So it is with the fossil fuel industry’s efforts to distort public discourse on the urgent subject of climate change.

If corporations and public relations firms can systematically alter the national debate in favor of their own interests and against those of society as a whole, then democracy itself is undermined.

I believe Congress can and should act to investigate this issue fully. Only then can we restore trust and legitimacy to American governance and fulfill our society’s moral duty to address climate change at a scale commensurate with its significance.

This article was originally published by The Conversation. Read the original article.