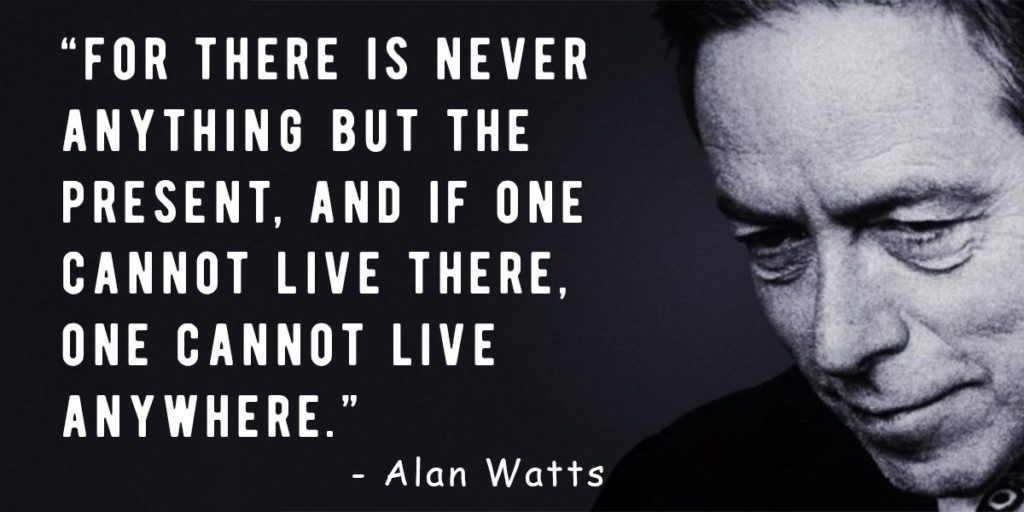 There was a time when the West was quite ignorant about the philosophies of the East. The East had only remained as an area to conquer and exploit – that there was a rich Eastern philosophy was something the West never really explored. Until a few Westerners went on an Eastern philosophical journey and shared their thoughts with the wider Western audience. Alan Watts is one such amazing personality. At first, Alan Watts became an Episcopal priest. But later on, he left this route and went to California to join the faculty of the American Academy of Asian Studies.

Alan Watts’ mother was a missionary and she used to teach children from Asia. From a young age, Alan Watts was fascinated by stories and myths circulating all over Asia. They were rich with a taste of Eastern Philosophy. And so, he learned Chinese and dived deep to learn the intricacies of this complex philosophy.

After researching Zen Buddhism rigorously, he published one of his first and most famous books: The Way of Zen. The wisdom in the book fascinated the youth. It was not an insight into any religion, it was more of psychotherapy. From then on, Alan Watts had produced wonderful books ranging from natural history, Western history, cybernetics to sexuality, and semantics, etc. His wisdom can be seen in his words, and in his sayings. They will clear your mind and set a clear path before you.

Here are some of the quotes by Alan Watts that will really clear up your mental blocks:

1. We seldom realize, for example, that our most private thoughts and emotions are not actually our own. For we think in terms of languages and images which we did not invent, but which were given to us by our society.

3. Trying to define yourself is like trying to bite your own teeth.

4. This is the real secret of life — to be completely engaged with what you are doing in the here and now. And instead of calling it work, realize it is play.

5. There will always be suffering. But we must not suffer over the suffering.

6. But I’ll tell you what hermits realize. If you go off into a far, far forest and get very quiet, you’ll come to understand that you’re connected with everything.

7. Every intelligent individual wants to know what makes him tick, and yet is at once fascinated and frustrated by the fact that oneself is the most difficult of all things to know.

8. The only way to make sense out of change is to plunge into it, move with it, and join the dance.

9. To have faith is to trust yourself to the water. When you swim you don’t grab hold of the water, because if you do you will sink and drown. Instead you relax, and float.

10. This is the real secret of life — to be completely engaged with what you are doing in the here and now. And instead of calling it work, realize it is play.

12. When you get free from certain fixed concepts of the way the world is, you find it is far more subtle, and far more miraculous, than you thought it was.

15. Problems that remain persistently insoluble should always be suspected as questions asked in the wrong way.

16. Meditation is the discovery that the point of life is always arrived at in the immediate moment.

18. One is a great deal less anxious if one feels perfectly free to be anxious, and the same may be said of guilt.

19. You didn’t come into this world. You came out of it, like a wave from the ocean. You are not a stranger here.

21. Never pretend to a love which you do not actually feel, for love is not ours to command.

22. There was never a time when the world began, because it goes round and round like a circle, and there is no place on a circle where it begins. Look at my watch, which tells the time; it goes round, and so the world repeats itself again and again.

23. The meaning of life is just to be alive. It is so plain and so obvious and so simple. And yet, everybody rushes around in a great panic as if it were necessary to achieve something beyond themselves.

24. Everyone has love, but it can only come out when he is convinced of the impossibility and the frustration of trying to love himself.

25. The positive cannot exist without the negative.

26. But the attitude of faith is to let go, and become open to truth, whatever it might turn out to be.

27. Words can be communicative only between those who share similar experiences.

28. The greater part of human activity is designed to make permanent those experiences and joys which are only lovable because they are changing.

29. Man suffers only because he takes seriously what the gods made for fun.

30. It’s better to have a short life that is full of what you like doing, than a long life spent in a miserable way.

So, find your way and clear your mind. Let the wisdom of Alan Watts pave your way to the future.

In this article:Alan Watts, Eastern philosophy