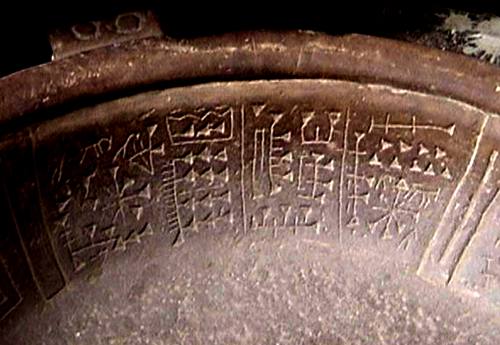 What are the true origins of humanity? There are so many ancient artifacts from the past that still perplex us today. How did ancient civilizations create such intricate and advanced technologies?There are so many mysteries surrounding mankind’s history that we are only recently becoming aware of! There seems to be a lot more going on than meets the eye.

Here are three of the most amazing forbidden archaeology discoveries to date!

1. The Fuente Magna Bowl – This is one of the most controversial artifacts in South America. It is a large stone bowl, similar to a container for making libations, baptisms or for purification ceremonies.

Found by a villager near Lake Titicaca, the engraved writing lining the bowl is [clearly] Sumerian!

The evidence: In 1992 an expedition in Chua discovered a bowl, which was unearthed by a local man some 30 years before, all covered with glyphs.

The stunning discovery was that the interior of the bowl was covered with what at first sight seemed cuneiform signs.

Photos of the interior panel were sent to linguistics around the world, who declared with no doubt that the writing system was Sumerian cuneiform.

Among the various linguists studying the bowl, we have to recall 2 important cases:

Clyde Winters was able to completely translate the content of the interior of the bowl. In his study “Deciphrement of the cuneiform writing on the Fuente Magna bowl” Winters clearly states that, in order to analyze the glyphs, he had only used orthodox material officially accepted from the establishment:

After translating the panels of the Fuente Magna bowl, Winters states that:

The Fuente Magna bowl still remains the most important finding supporting the link between Mesopotamic and Mesoamerican cultures, establishing that Sumerians were able to settle in Bolivia some 5000/4000 years ago. – Reference

2. Lake Winnipesaukee Mystery Stone – The stone’s age, purpose, and origin are unknown. It was found in the late 1800s by a few working men digging a fence post.

The carvings on one side of the stone show an image of corn and several other unknown figures.

The other side is more abstract, featuring pictures of arrows, a moon, some dots and a spiral. There is a hole through the stone, bored from both ends with different size bits (1/8 inch at top and 3/8 inch at bottom).

The quality of the carvings is clearly superior to the possibilities of those who supposedly made it (i.e. American Indian tribe).

3. The Stone Spheres of Costa Rica – There is an assortment of over 3,000 perfectly carved round stones. There is no solid explanation as to why, how, or when they were placed there. How did these balls get carved so smoothly without the use of any advanced technology? There is so much more going on in our world than we are being taught.