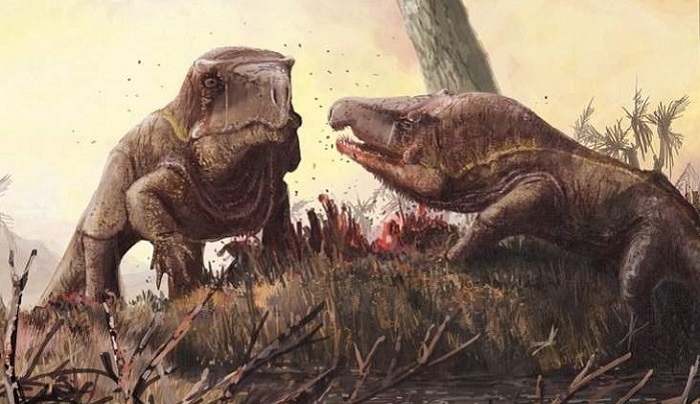 This strange “dragon” lived on Russian territory in a time when dinosaurs did not exist yet.

The first remains of these lizards were discovered in the 1950s, near Orenburg. The creature is named Garyainiy, in honor of archaeologist V. Garyainov.

Externally, the animal is like a modern dragon or crocodile, with a short muzzle, but its head is unusually large.

The big head had powerful jaws with large, sharp teeth. According to one researcher, these teeth were sharp as meat knives and could tear large pieces of meat out of the loot in a few moments.

The length of Garinia was 3-4 meters, 60 cm of which were from the skull. The creature belongs to a family of primitive semi-aquatic reptiles.

Half a century later, another of the same kind of “dragons” was discovered in Bashkortostan. Recently, British researchers have carefully studied the remains of both animals and published a report on them in the journal Royal Society Open Science.

According to them, both animals are virtually indistinguishable from each other, that is, there is only one species of Garinia.

At first glance, these “dragons” look very ridiculous due to the disproportionate huge head with the rest of the body. In reality, however, they were rather skilful predators and their heavy heads were balanced by the heavy back of the body.

They ate 70% of the meat. With its huge mouth, this monster could tear and absorb large pieces at once.

Therefore, the Garinians were the dominant predators of their era before the advent of dinosaurs.

Advertisement. Scroll to continue reading.
In this article:Garinia, Russian dragon