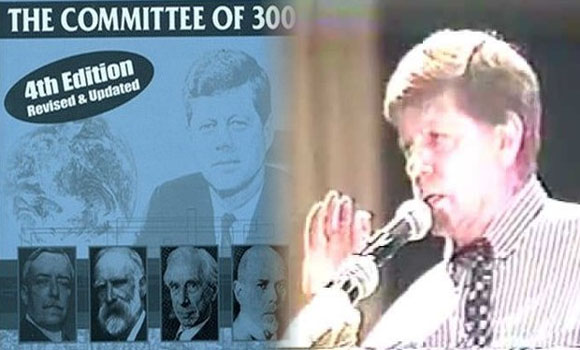 An excerpt from Dr. Coleman’s work, The Conspirators’ Hierarchy: The Committee of 300, covering the major goals of the Illuminati is posted below.

By: Dr. John Coleman From: Conspirators’ Hierachy: The Story of The Committee of 300

1. To establish a One World Government/New World Order with a unified church and monetary system under their direction. The One World Government began to set up its church in the 1920:s and 30:s, for they realized the need for a religious belief inherent in mankind must have an outlet and, therefore, set up a “church” body to channel that belief in the direction they desired.

2. To bring about the utter destruction of all national identity and national pride, which was a primary consideration if the concept of a One World Government was to work.

3. To engineer and bring about the destruction of religion, and more especially, the Christian Religion, with the one exception, their own creation, as mentioned above.

4. To establish the ability to control of each and every person through means of mind control and what Zbignew Brzezinski called techonotronics, which would create human-like robots and a system of terror which would make Felix Dzerzinhski’s Red Terror look like children at play.

5. To bring about the end to all industrialization and the production of nuclear generated electric power in what they call “the post-industrial zero-growth society”. Excepted are the computer- and service industries. US industries that remain will be exported to countries such as Mexico where abundant slave labor is available. As we saw in 1993, this has become a fact through the passage of the North American Free Trade Agreement, known as NAFTA. Unemployables in the US, in the wake of industrial destruction, will either become opium-heroin and/or cocaine addicts, or become statistics in the elimination of the “excess population” process we know of today as Global 2000.

6. To encourage, and eventually legalize the use of drugs and make pornography an “art-form”, which will be widely accepted and, eventually, become quite commonplace.

7. To bring about depopulation of large cities according to the trial run carried out by the Pol Pot regime in Cambodia. It is interesting to note that Pol Pot’s genocidal plans were drawn up in the US by one of the Club of Rome’s research foundations, and overseen by Thomas Enders, a high-ranking State Department official. It is also interesting that the committee is currently seeking to reinstate the Pol Pot butchers in Cambodia.

8. To suppress all scientific development except for those deemed beneficial by the Illuminati. Especially targeted is nuclear energy for peaceful purposes. Particularly hated are the fusion experiments currently being scorned and ridiculed by the Illuminati and its jackals of the press. Development of the fusion torch would blow the Illuminati’s conception of “limited natural resources” right out of the window. A fusion torch, properly used, could create unlimited and as yet untapped natural resources, even from the most ordinary substances. Fusion torch uses are legion, and would benefit mankind in a manner which, as yet, is not even remotely comprehended by the public.

9. To cause. by means of limited wars in the advanced countries, by means of starvation and diseases in the Third World countries, the death of three billion people by the year 2050, people they call “useless eaters”. The Committee of 300 (Illuminati) commissioned Cyrus Vance to write a paper on this subject of how to bring about such genocide. The paper was produced under the title “Global 2000 Report” and was accepted and approved for action by former President James Earl Carter, and Edwin Muskie, then Secretary of States, for and on behalf of the US Government. Under the terms of the Global 2000 Report, the population of the US is to be reduced by 100 million by the year of 2050.

10. To weaken the moral fiber of the nation and to demoralize workers in the labor class by creating mass unemployment. As jobs dwindle due to the post industrial zero growth policies introduced by the Club of Rome, the report envisages demoralized and discouraged workers resorting to alcohol and drugs. The youth of the land will be encouraged by means of rock music and drugs to rebel against the status quo, thus undermining and eventually destroying the family unit. In this regard, the Committee commissioned Tavistock Institute to prepare a blueprint as to how this could be achieved. Tavistock directed Stanford Research to undertake the work under the direction of Professor Willis Harmon. This work later became known as the “Aquarian Conspiracy”.

11. To keep people everywhere from deciding their own destinies by means of one created crisis after another and then “managing” such crises. This will confuse and demoralize the population to the extent where faced with too many choices, apathy on a massive scale will result. In the case of the US, an agency for Crisis Management is already in place. It is called the Federal Emergency Management Agency (FEMA), whose existence I first enclosed in 1980.

12. To introduce new cults and continue to boost those already functioning which include rock music gangsters such as the Rolling Stones (a gangster group much favored by European Black Nobility), and all of the Tavistock-created rock groups which began with the Beatles.

13. To continue to build up the cult of Christian Fundamentalism begun by the British East India Company’s servant Darby, which will be misused to strengthen the Zionist State of Israel by identifying with the Jews through the myth of “God’s chosen people”, and by donating very substantial amounts of money to what they mistakenly believe is a religious cause in the furtherance of Christianity.

14. To press for the spread of religious cults such as the Moslem Brotherhood, Moslem Fundamentalism, the Sikhs, and to carry out mind control experiments of the Jim Jones and “Son of Sam” type. It is worth noting that the late Khomeini was a creation of British Military Intelligence Div. 6, MI6. This detailed work spelled out the step-by-step process which the US Government implemented to put Khomeini in power.

15. To export “religious liberation” ideas around the world so as to undermine all existing religions, but more especially the Christian religion. This began with the “Jesuit Liberation Theology”, that brought an end to the Somoza Family rule in Nicaragua, and which today is destroying El Salvador, now 25 years into a “civil war”. Costa Rica and Honduras are also embroiled in revolutionary activities, instigated by the Jesuits. One very active entity engaged in the so-called liberation theology, is the Communist-oriented Mary Knoll Mission. This accounts for the extensive media attention to the murder of four of Mary Knoll’s so-called nuns in El Salvador a few years ago. The four nuns were Communist subversive agents and their activities were widely documented by the Government of El Salvador. The US press and the new media refused to give any space or coverage to the mass of documentation possessed by the Salvadorian Government, which proved what the Mary Knoll Mission nuns were doing in the country. Mary Knoll is in service in many countries, and placed a leading role in bringing Communism to Rhodesia, Moçambique, Angola and South Africa.

16. To cause a total collapse of the world’s economies and engender total political chaos.

17. To take control of all foreign and domestic policies of the US.

18. To give the fullest support to supranational institutions such as the United Nations, the International Monetary Fund (IMF), the Bank of International Settlements, the World Court and, as far as possible, make local institutions less effective, by gradually phasing them out or bringing them under the mantle of the UN.

19. To penetrate and subvert all governments, and work from within them to destroy the sovereign integrity of the nations represented by them.

20. To organize a world-wide terrorist apparatus and to negotiate with terrorists whenever terrorist activities take place. It will be recalled that it was Bettino Craxi, who persuaded the Italian and US Governments to negotiate with the Red Brigades kidnapers of Prime Minister Moro and General Dozier. As an aside, Dozier was placed under strict orders not to talk what happened to him. Should he ever break that silence, he will no doubt be made “a horrible example of”, in the manner in which Henry Kissinger dealt with Aldo Moro, Ali Bhutto and General Zia ul Haq.

21. To take control of education in America with the intent and purpose of utterly and completely destroying it. By 1993, the full force effect of this policy is becoming apparent, and will be even more destructive as primary and secondary schools begin to teach “Outcome Based Education” (OBE).

Advertisement. Scroll to continue reading.
In this article:Committee of 300, goals, illuminati