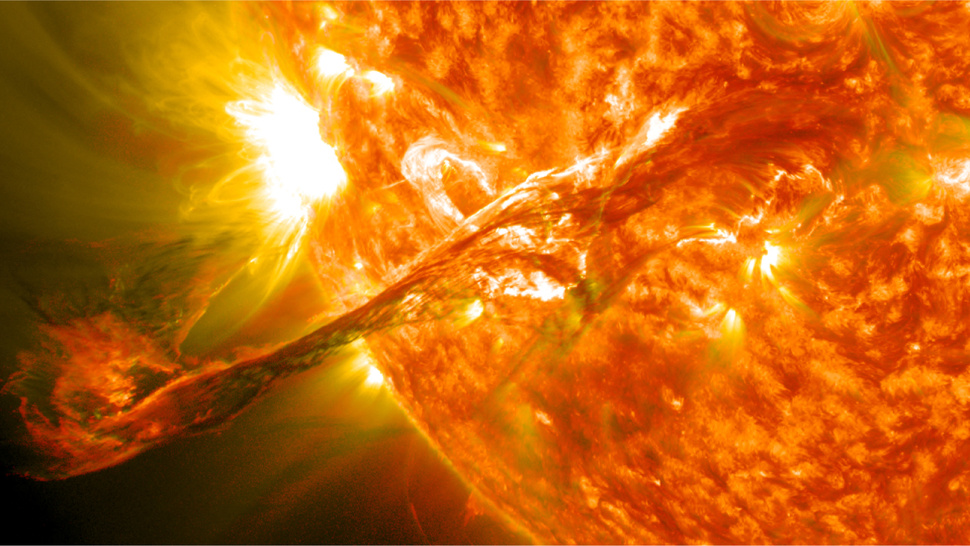 So this is unexpected. The Sun is currently at the peak of its 11-year solar cycle. It should be awash with sunspots, solar flares, coronal mass ejections and the like.  And yet, observations indicate our parent star has actually been pretty quiet this year – so quiet, in fact, this year’s solar max could go down as the weakest in a century.

Above: An epic solar flare from August 2012

Earlier this year, there was speculation that scientists had miscalculated the maximum of the current cycle, though it’s become increasingly apparent that no, this is the maximum, it’s just a quiet one. And that, according to NASA, isn’t necessarily uncommon:

Conventional wisdom holds that solar activity swings back and forth like a simple pendulum.  At one end of the cycle, there is a quiet time with few sunspots and flares.  At the other end, Solar Max brings high sunspot numbers and solar storms. It’s a regular rhythm that repeats every 11 years.

Reality, however, is more complicated. Astronomers have been counting sunspots for centuries, and they have seen that the solar cycle is not perfectly regular. For one thing, the back-and-forth swing in sunspot counts can take anywhere from 10 to 13 years to complete; also, the amplitude of the cycle varies.  Some solar maxima are very weak, others very strong.

Back in March, solar physicist Dean Pesnell of the Goddard Space Flight Center hypothesized that the Sun could be experiencing a lull between two peaks in sunspot activity. A similar “twin peak” solar maximum, Pesnell said, occurred back in 1989, and again in 2001.  The first peak of the current solar maximum, he said, reached its zenith in 2011, dipped in 2012, and continued through the beginning of 2013. “I am comfortable in saying that another peak will happen in 2013 and possibly last into 2014,” he predicted at the time.

But 2014 is fast approaching, and still no signs of a second spike. Is this a bad thing? Hardly. Disappointing? You might think so, said Hathaway at yesterday’s conference, “but it’s quite the contrary.”

SPACE.com gives an example of what Hathaway and his colleauges are taking away from this cycle’s tamer-than-usual antics:

North-south, or meridional, flows carry magnetic elements from sunspots to the sun’s poles, building up the polar magnetic fields until they eventually flip around the time of the solar maximum, Hathaway explained. Scientists are noticing that the strength of the polar fields when a new cycle begins influences the strength of the cycle, he added. For example, weak polar fields observed in 2008 led to the current weak cycle, while strong polar fields in 1986 spawned a strong Cycle 22.

The polar fields have been slowly reversing at this maximum, Hathaway said, suggesting that they are not going get much stronger during Cycle 24. This also sets the stage for an even smaller maximum during Cycle 25, scientists believe.

“We’re seeing fields that suggest the next sun cycle will be even weaker than this one,” Hathaway said.

Us? We still have our fingers crossed for that second peak. We could always go for a few more facemelting CMEs, but 2013 is fast running out of days.

In this article:Nasa, solar cycle, Sun