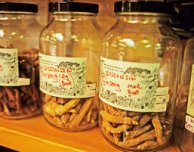 Pharmaceuticals prescribed for mood are among the most dangerous due to their side effects and high toxicity to brain chemicals and hormones. Medicinal plants and natural nutrients are extremely effective in promoting neurotransmitter balance while promote relaxation. Here are 13 of the most effective mood stabilizers in natural medicine. 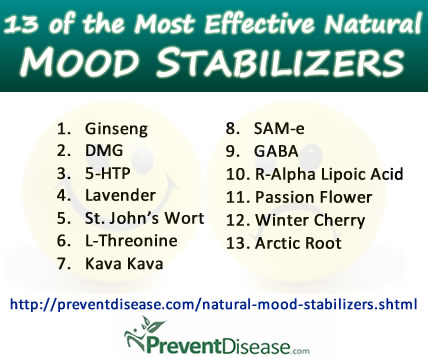 Mood-stabilizing drugs are purely antimanic agents, which are mainly for treating mania. From this perspective, they are quite different from antidepressants, which are also called mood enhancers, elevators, or boosters in treating depression. Natural mood stabilizers help the body metabolize those chemicals which enhance mood, something drugs can never do due to specific metabolic pathways necessary to metabolize the chemical constituents.Unlike pharmaceuticals, natural mood stabilizers:

13 OF THE MOST EFFECTIVE NATURAL MOOD STABILIZERS

1) Ginseng Ginseng can have several advantages for health including mood. There are three ginseng herb species, but the most important of the three are Asian (Panax) ginseng and American ginseng (Panax quinquefolius ). These herbs are shown to have the most advantages for people who need to improve their mood. Ginseng has also been shown to inhibit tumor growth, relieve symptoms of diabetes and boost the immune system. Ginseng is available in several forms, and is available over-the-counter without a prescription. Ginseng is available in extracts, liquid or pill form.

2) DMG (Dimethylglycine)  An important supplement that can be obtained naturally from diet, the molecule is part of a group of important chemicals called methyl donors. This chemical structure is essential to the body, and plays many important roles. The bodys ability to attach a methyl group to another molecule enhances enzyme production, chemical metabolism, as well as mood and energy levels. For DMG to work optimally biochemically, folate intake and levels in the body must be adequate . DMG is noted to increase physical stamina and energy levels. In children, it has been seen to increase attention span and decrease irritability.

3) 5-HTP (5-Hydroxytryptophan) Building block to the neurotransmitter Serotonin, which regulates mood balance. 5-HTP is a derivative of the amino acid L-Tryptophan, which is both produced by the body and found in high-protein foods such as dairy products, fish, poultry and other lean meats. The supplement form of 5-HTP is naturally extracted from the seeds of Griffonia simplicifolia, a tree native to the Ivory Coast and Ghana. 5-HTP is a nutrient that acts as a building block for the neurotransmitter Serotonin and may help to promote healthy neurotransmitter balance following daily use for two to six weeks.

5) St. Johns Wort Natural reuptake inhibitor that supports a healthy neurotransmitter balance. St. John’s Wort is an aromatic perennial herb with an abundance of golden-yellow flowers. Tiny perforations filled with phytochemical-rich oils cover the aerial (above- ground) portions of St. John’s Wort and yield an extract that gives the plant its primary health benefits. Current usage statistics indicate that millions of Americans supplement their daily diets with St. John’s Wort to promote positive mood balance. The medicinal components of St. John’s Wort, which include Hypericin and Hyperforin, have been clinically shown to promote a healthy neurotransmitter balance, which can help to provide positive mood support following two to six weeks of continued use.

6) L-Threonine The Princeton Brain Bio Institute found that low levels of the essential amino acid threonine have been found in people with depression, they found that increasing threonine levels could help improve mood. Sesame seeds in all shapes and forms are one of the best food sources of this nutrient. It supports cardiovascular, liver, central nervous, and immune system function. L-threonine has been researched for ALS because it affects glutamate metabolism.

7) Kava Kava Kava kava is a root that is used to relax and soothe mood. Kava is found in tea or in pill form, and it can be purchased at a local vitamin shop or health food store. Kava grows in the South Pacific and is used for medicinal purposes including mood and insomnia. Kava is found in pills to help patients with anxiety, but it’s also known for its ability to help addicts through withdrawal symptoms that include insomnia. Kava improves mood for people, helping them reduce anxiety during withdrawal. Kava should be taken with caution, since it has been shown to harm the liver when taken in excess.

8) SAM-e (S-Adenosylmethionine) Natural reuptake inhibitor used to support a healthy neurotransmitter balance. SAM-e (pronounced “sammy”) is a naturally occurring chemical that performs a wide range of functions throughout the body. In clinical study, SAM-e supplementation has demonstrated a broad spectrum of action to stimulate neurotransmitter productivity and maintain healthy cell-to-cell communication. Italian researchers discovered the benefits of SAM-e in the 1970s, when they observed it to have significant effects on individuals experiencing mood changes. SAM-e has been available over the counter in the United States since 1996, and is widely used as a dietary supplement to provide positive support for depressed mood and mild to moderate mood changes caused by everyday stress, including occasional nervousness, nervous tension and anxiety.

9) GABA Considerable evidence implicates the neurotransmitter aminobutyric acid (GABA) in the biochemical pathophysiology of mood disorders. Animal models of depression show regional brain GABA deficits and GABA agonists have antidepressant activity in these models. he balance between the limbic system, and in fact, the rest of the brain to communicate in an orderly manner depends critically on inhibition.  GABA inhibits the cells from firing, diminishing the anxiety-related messages from reaching the cortex. GABA, glutamine and glycine are vital for energy and the smooth running of the brain functions.  B6 (pyridoxine) is GABA’s most important partner.10) R-Alpha Lipoic Acid R-Alpha Lipoic Acid is made by the human body and its levels drop by age. There are functional differences between endogenous (produced by the body) and exogenous (from supplements): Endogenous R-Alpha Lipoic Acid is bound to proteins, whereas the exogenous (supplemental) is unattached and easily goes into circulation. Both spatial and temporal memory improves with R-Alpha Lipoic Acid supplementation and oxidative damage to the hippocampus of the brain decreases. It has been said that the Acetyl-L-carnitine/alpha-lipoic acid combo may also protect from neurodegeneration or cognitive impairment. This combination also shows great potential for neurological repair in diseases such as: age related dementia; Amyotrophic lateral sclerosis (ALS), which is better known as Lou Gehrig’s disease; Alzheimer’s disease (AD); and Multiple sclerosis (MS), which is also known as “disseminated sclerosis” or “encephalomyelitis disseminata.”

11) Passion Flower Natural sedative relieves occasional anxiety and mild panic attacks. Passion Flower is a woody vine that bears small berry-like fruit calledgrandilla. The brightly colored flowers and above-ground portions of the Passion Flower vine are used to derive medicinal compounds that relax the central nervous system and promote emotional balance. In the United States, Passion Flower is classified as GRAS (Generally Recognized as Safe) by the Food and Drug Administration. Substances that receive a GRAS classification have maintained a long, safe history of common use in foods or have been determined to be safe based on proven scientific research.

12) Winter Cherry Relieves nervous tension, occasional anxiety and mental fatigue. Winter Cherry, or Ashwagandha Root, is among the most prominent herbal preparations used in Ayurveda, a holistic system of medicine that originated in India. The root of this small evergreen shrub is primarily recognized for its adaptogenic properties, meaning it naturally increases the body’s resistance to physical and emotional stress. Practitioners of Ayurveda traditionally prescribe Winter Cherry to promote gentle relaxation and emotional balance. Research has shown that Winter Cherry is a safe, natural sedative that produces the most noticeable benefits following daily use for two to six weeks.

13) Arctic Root (Rhodiola Rosea)  Relieves occasional anxiety and positively supports the body during periods of stress. Arctic Root is a plant indigenous to Siberia, where it thrives in high altitudes and dry arctic climate. The primary medicinal compounds of Arctic Root are derived from the root of the plant. In Russia, Scandinavia and much of Europe, Arctic Root has been traditionally recognized for its adaptogenic properties. An adaptogen is a physiological agent that naturally increases the body’s resistance to physical and emotional stress. Rhodiola Rosea has been clinically shown to stimulate Serotonin, Norepinephrine and Dopamine activity, and may help to support healthy neurotransmitter balance.LIFE CHOICE NEUROTRANSMITTER SUPPORT Contains: Acetyl-L-Carnitine, R-Alpha Lipoic Acid, Pantothenic Acid, Co-enzyme Q10, methylcobalamin, DMG, GABA, L-Tyrosine, L-Threonine.

This advanced formulation is a breakthrough for increasing energy, memory, neuronal activity and mental clarity either taken for prevention and or recovery of declining brain activity. 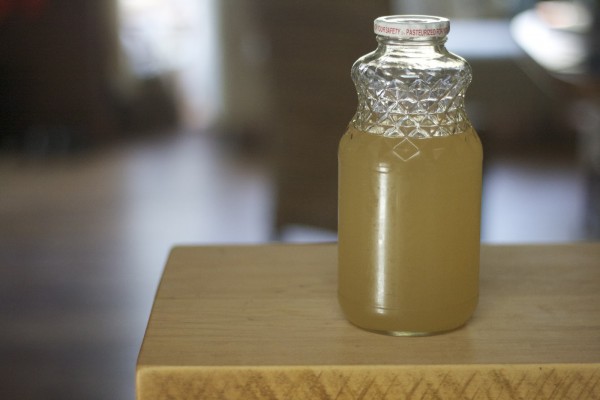 by healthcareaboveall The basic formula of this powerful tonic dates back to medieval Europe, that is, from the era when people suffered from all... 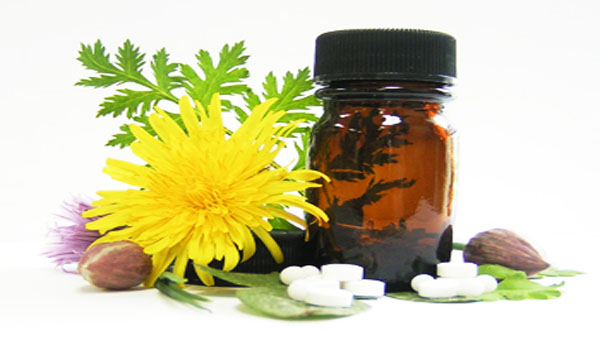 Brooke Montgomery Mindbodygree Winter is in full force…and with that, so is cold and flu season. I woke up the other day feeling totally...