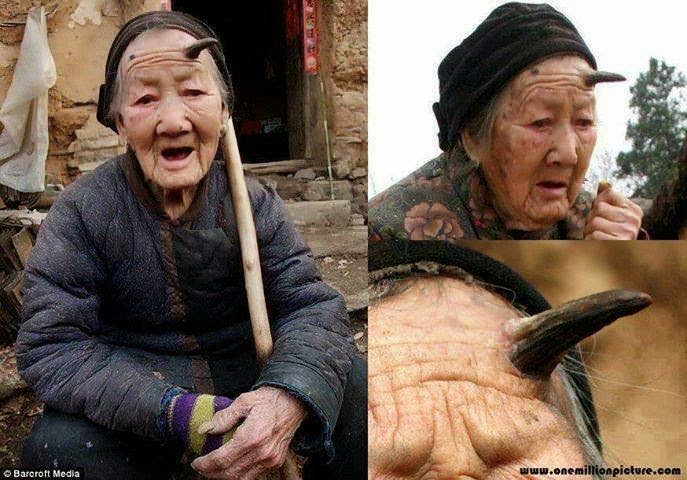 But it is now six centimetres long and a small lump has now appeared on the other side of her forehead.

Her youngest son, Zhang Guozheng, 60, said the horn started as a patch of thick, rough skin on the left side of her forehead.

We didnt pay too much attention to it at first, he said. But as time went on it just grew and grew.

And now there is something growing on the right side of her forehead and it seems quite possible that its another horn.

Zhang has seven children six boys and a girl and many grandchildren. Her eldest son is 82-years-old.

The family live in a rural area and dont have the money to send her to hospital but they say she is in no pain and enjoys a peaceful life.

The condition is known as a cutaneous horn, which is an uncommon deformity. Composed of keratin, these horns usually develop in elderly adults, particularly those who have had a history of sun exposure. Still, a growth of this size is rare. In more than half of the cases, they are benign but they can be cancerous. The horns can be surgically removed but without treating their cause, they may return.

In this article:China, cutaneous horn, keratin